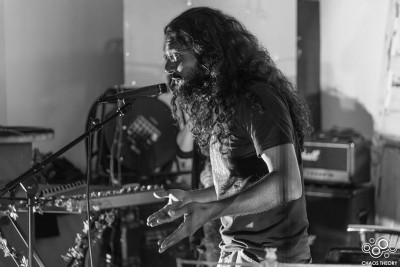 I met Kunal about 4 or 5 years ago when the Echoes And Dust writers met for drinks. I then hung out with him for 3 days at Desertfest and haven’t been able to shake him off since. In all seriousness, Kunal is a righteous dudes and puts gigs on under the name Chaos Theory, which is now going into its seventh year! The boundaries of Chaos Theory are constantly smashed with different styles of music and he’s working with more venues than ever. He’s a bit of a master of discovering underground bands so I thought I’d check in for a nice chat with my good pal.

Pretty good. Knackered because I got up well early, but it did give me time to have two breakfasts, which is always awesome. Also I’ve been booking bands for next year and playing with DJ sets, so I’m in a good mood right now.

(((o))): You seem to be doing more gigs than ever with different styles across more venues. Has it been a storming year for Chaos Theory?

It’s been a crazy year for Chaos Theory! We’ve had such a unique bunch of artists who’ve been willing to work with us from all sorts of backgrounds that it’s been a real eye-opener. At the beginning of the year, I realised that I hadn’t actually been stressed about a gig in a while, so decided that meant upping the ante and trying some new stuff. Now I’ve pulled out half my hair and shat my pants over several gigs as we got more ambitious, but god dammit it was worth it! We’ve worked with more bands who I never imagined I’d work with when they were totally blowing my mind over a decade ago, I’ve been introduced to and educated about types of music than ever before, we’ve seen more regulars from one type of night experimenting and trying out different styles, other very clever promoters and myself have been coordinating better with each other so that we can avoid bad clashes, and as a result we’ve had more sold out shows this year than the entire six years before.

(((o))): You’re different to most promoters with the sheer variety of the stuff you put on. Tell us about the concept behind Chaos Theory and how it works!

Originally it was just about providing underground bands with a decent quality gig to push back against the shocking norms of underground gigs in London when I moved here. But pretty quickly the idea evolved into creating a space for people to come and discover music that they know nothing about, and a space for weirder musicians to get heard by people outside of their normal crowds.

People always seem really surprised when I don’t know the names of every band member from the metal scene, or have never heard of some landmark jazz musician etc. The reason is that I don’t know anything about music! I’ve only been digging and discovering interesting new sounds for the last decade or so, I never really stuck to one genre and keep on discovering great new sounds that expand my whole musical world view. I hate repetition and get bored of routine very quickly, so belonging to any one type of “scene” never interested me. I want to hear new sounds, be lost in a crowd of strangers and never sit in my comfort zone. So Chaos Theory is trying to be that gateway promotion for people like me, who never know what they like and are open to trying new things. Of course, we love that math rock fans enjoy our math rock gigs, and folk fans enjoy our folk gigs, but we have a growing number of regulars who “get it” and want to come to random nights when they’ve never heard of the bands, and just see if it’s their thing or not. I have absolutely no clue about anything, and only by going to gigs by decent promotions do I discover my favourite new bands and scenes. Chaos Theory provides gigs for people into various scenes, but also welcomes people who don’t know anything about those scenes and who don’t want to feel like they don’t fit in. My biggest sense of accomplishment comes from meeting that person who’s only ever listened to folk their whole life, then had an epiphany during Bast and now listens to doom as well, that prog fan who came to check out some gothic folk, that indie fan who realised that they actually had grown to love math rock because of The Facemelter and booked themselves a ticket to give ArcTanGent Festival a try, that person who’d never really been to any gig and now can’t stay away. The concept is: gigs for both music geeks and people who have no idea where to look for new music.

Seb’s had people trying to bribe him to let them into sold out shows. I love a friendly blag attempt, even though it won’t work. One guy tried to get into a gig for free as a photographer, but I loved the way he did it, so he ended up being part of the team and one of our main photographers for a while.

The best place for me is at festivals and gigs. Sometimes bands are great on record but don’t deliver the same thing live, but usually I find it’s the other way around. There are tons of bands I don’t really find myself in the mood to listen to on record, but whose live shows I can’t keep away from. The vibe, the atmosphere, the interaction, seeing exactly what the musicians are doing, there’s nothing that will ever beat that for me, so following great “out there” promotions like Cosmic Carnage, Jazz Standard, Old Empire, This Is Not Revolution Rock, Oil54, ArcTanGent, DesertFest, Roadburn, plus a lot of things that go down at Cafe Oto, New River Studios, The Vortex, The Bird’s Nest, The Unicorn and The Underworld, is always the best way to discover bands for me. It also helps when bands come to a lot of Chaos Theory gigs and say hi, get to know the types of gigs we do and what we’re all about, then approach me about a gig, as I know they really know what we’re about, support what we do and would know which nights would be appropriate for them.

Fuck you! I’m doing a top five. But in no order.

Vodun album launch at The Lexington. It was a hurricane of good vibes.

The Display Team album launch, just because none of the bands or fans expected it to sell out, the vibe was huge, everyone was in a great mood and the music was incredible. One of the most fun nights I’ve ever had.

Bitch ‘n’ Monk’s album launch at Rich Mix, because the music we were promoting was truly unusual and stimulating for me, I got to work with legend Chris Sharkey again, plus I’d never worked with Tina Edwards from Jazz Standard, who’s got some serious promotion game, and saxophonist Peter Ehwald who is a sweetheart. Also I ticked off a bucket list ambition of working with Rich Mix.

Father Murphy, Muscle and Marrow and Tolerance Manoeuvre. That was an exceptional night of music, there was electricity in the air and it was a privilege to work with people who I consider to be true boundary-pushing artists.

Latitudes’ album launch with Telepathy and PSOTY, because it was heaving with lovely people, everyone was excited, the music was jawdropping, and it gave me some lifelong memories.

Fuck you! My best three gigs were:

Kneedelus, a collaboration between Brooklyn jazz band Kneebody and producer Daedelus, to end the Serious Space takeover at Rich Mix

Selvhenter at Raw Power Festival. They were one of my best discoveries this year.

Roadburn, hands down. It was the only time I’ve ever seen a band that I felt were better than AmenRa’s full hammerblow of a live set, and that was Cult Of Luna. Also AmenRa’s acoustic/down tempo set had the hairs standing up on the back of my neck, I finally got to see Hemelbestormer, which was totally worth it, The Body freaked me the fuck out, I was part of a great moment in history to witness two sets by Neurosis for their 30th anniversary, Jakob was a good bit of post-rock relief, solid riffs from Behold! The Monolith, and I got to discover Misþyrming. No contest.

Many! I’m definitely going to keep remembering more and more after writing this, but off the top of my head:

Love by Muscle and Marrow
Kneedelus by Kneebody and Daedelus
Old Sunlight by Latitudes
We Are Peering Over by Bitch ‘n’ Monk
Oracle War by Taman Shud
Overview Effect by Roger Goula
Asphalt For Eden by Dälek
Y Proffwyd Dwyll by Mammoth Weed Wizard Bastard
Perseverantia by Danielle De Picciotto and Alexander Hacke.
Oh and The Gospel by Arabrot
Channel The Spirits by The Comet Is Coming!

Probably putting on some gigs, DJing at gigs and going to gigs. And cataloging my ginger beer collection.