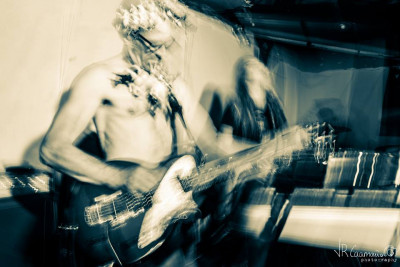 We love Russ Smith at Cosmic Carnage, he lives in rural France and only comes over to the UK to fucking rock! He’s the axe man in both Terminal Cheesecake and Melting Hand, who’ve both had busy year releasing albums and touring so I thought it would be good to check in with the man himself and find out what the fuck is going on.

Good thanks, just put my smoking jacket and slippers on and am in the process of lighting a big stogie.

(((o))): It’s been an awesome year for Terminal Cheesecake. Your first album in decades lots of gigs and European Festivals. How’s it been for you?

Completely off its head, some marvelous excursions out and about in the countryside at festivals and àlso some belting shows surpassing all that we have achieved in previous years, very enjoyable all in all.

(((o))): The album is super experimental ,what drives this weirdness?

Twisted band members and the effects of years of drug and alcohol abuse in the main . I jest, we are all vegan teetotallers these days.

(((o))): Melting Hand have really established themselves this year with an album and Euro tour. Are you enjoying the Melting Hand experience?

I think so, I mean not to enjoy jamming spaced out sonic grooves with my fellow Melting Handers would be impossible, it is just pure group indulgence and we all love it . Lots !

(((o))): How do you think the weird underground rock scene compares between now and when you first started playing in bands?

Its certainly more supportive/communal as a scene these days, less competitive, equally as intense and reassuringly still championing fine new acts. Good times to be going out to gigs and playing in bands, I feel very lucky to be a small part of the scene today .

The Brixton Cosmic Carnage TC gig in a dead heat with Nottingham ( Bloom) a month or so earlier.

TC euro tour in april, mainly in France as we rather like it here, the release of the Cheesecake film with accompanying concerts, new Melting Hand recordings, continued sampling of Belgian, East european and German beers in the name of research , continuing my studies in the mastery of cooking Indian cuisine, debut lp of a new project with Chris Stallone nàmed Plasticface, spreading the message of peace and love and understanding, man.