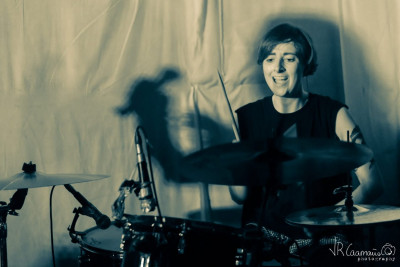 I met Julia a few years ago when she was drumming in Throne, she’s awesome. These days, she’s tub thumbing in two very different acts, Casual Nun and Grave Lines who have both smashed Cosmic Carnage this year. Here’s what’s going on inside her thinker.

I’m knackered! I’ve just played three shows over six days, and one of those was in Athens. I’ve loved every minute of it, but I’m looking forward to having a couple of weeks off over Christmas just to sit and eat panettone in my jammies.

(((o))): You’ve had quite the year with Casual Nun. A debut album released on Hominid Sounds, a performance at Supernormal, a tour with Arabrot and a gig in Greece. How’s it been for you?

It’s been amazing, and we’re really comfortable playing with each other now. It just feels like we’re going from strength to strength. Plus they’ve let me design all the artwork!

(((o))): What’s it like playing with another drummer? Looks fun!

Yeah it’s great. Especially with Phil, as our playing style is very different from one another. He’d been playing with Casual Nun for a little while before I joined, so I’m just pleased to be let into the circle.

Rich, you wouldn’t believe how excited I am. I was sitting at a village fete, watching a dog contest and drinking a pint when I found out. I was already having an excellent time. And then you messaged me, saying something along the lines of “fucking hell”. That was it. And then Matt told me! I never thought I’d play Roadburn…what a dream.

(((o))): You formed Grave Lines this year who already have supported Ufommamut and have a spot at next year’s Desertfest. How has it gained so much momentum from such an early stage do you think?

We’ve all been playing in bands for a few years now, and we’re all done with the shitty shows you think you have to play when you’re starting out. I guess we’ve just been quite selective in what we agree to, and having bandmates who are so engrossed in the scene just makes it easier.

Oof. That’s a tough one. I should start writing down all the gigs I’m playing! But I think the best gig is a toss-up between Supernormal and the show at SixDogs Casual Nun played last weekend in Athens.

Alice Cooper. No one can beat that stage show! But also your Smash it Out All-Dayer in August this year was great – first time I’d seen Lower Slaughter and No Spill Blood, and now I’m obsessed.

Supernormal. If you’ve been, you know.

Next year is already filling up nicely. UK and Euro tours are being planned for both bands, Casual Nun are talking about heading over to Greece again in the summer to play some more shows (hopefully on an island or two) as well as a bunch of festivals for both bands including Desertfest, Roadburn and Temple of Boom in Leeds.