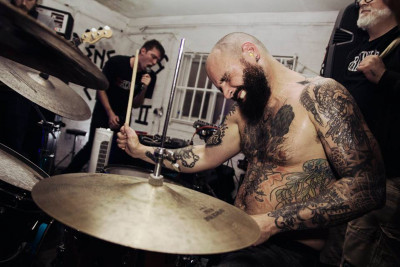 I went to Leeds this year to see Pigs x 7, Luminous Bodies and Girl Sweat in a venue called CHUNK! I was fucking blown away by place, DIY in it’s purest form with an incredible vibe, truly inspiring! If you ever get the chance to play or visit, grab it with both hands. Steve is one of the collective running this diamond of a place and he let me sleep on his couch that night, what a great guy! I’ve known Steve for a couple of years now, one of his bands, Cattle blew us away at the first ever Cosmic Carnage SMASH IT OUT all dayer. Another one of his bands, Clenstch headlined a Cosmic Carnage at the Unicorn back in June too, they were fucking slammin’! Here’s what he has to say for himself.

Hiya Rich! All good ta, just at the end of a pretty long weekend. Managed to get out to a couple of gigs and a crimbo catch up with some top mates yesterday. Back to the grind now though.

(((o))): The Cattle album is out very soon, it’s seemingly come from nowhere. How long has it been in the pipeline and who’s putting it out?

Yeaaah it’s been a long time coming, so happy to finally have it on the brink. The album was recorded the February before last by our bassist and his mate Hamish, recording stuff yourself is a good laugh but it’s meant that we’ve been able to take our time with it, bit of a double edged sword but we’re chuffed with how it’s come together. There was a wee bit of a line up change since then so we’ve been concentrating on getting back on it again. We could maybe have got it out a little earlier but we went down the 12″ route so pressing takes time, also decided to screen print the covers with our best babe over at Discordant Sun which has meant figuring out a few logistics. We’re putting it out as a collab with Hominid Sounds who have been really good to us, mega happy to be involved with those lot, they’ve got a bunch of ace stuff coming up too.

(((o))): What have Groak and Clenstch been up to this year? Any full lengths planned for either band?

Groak have been having a good laugh this year, went over to the mainland for a couple of weeks with top boys Endless Swarm early October finishing off with a set at the Bloodshed Fest Warmup in Eindhoven, had a great time with those lot and it was ace to be back out on the road again. Managed to do another couple of weeks with Cattle and our besties in Zozo earlier in the year too. Was so good to get over to the continent again, been a long time since I was out there so managed to catch up with some old friends and make some new ones. Good excuse for a bit of quality time with the boys and the legend that is our driver Loz Clarke. Got a couple of splits lined up with Groak, just getting back into writing again after a fairly gig heavy year, think we’ll be concentrating on getting the splits up and then maybe compiling everything we’ve done so far on a long play before getting to work on a full length.

Clenstch has had a bit of a quiet one since summer mainly due to Tom (bassist in Clenstch and Cattle) popping a sprog in September (congrats to him, Jodie and baby Miles!) think we’ll start getting back on it in the January though, we started recording an album earlier in the year so we’re keen to get back to work on that. Been really nice taking things at a relaxed pace to be honest, we’re both pretty stacked up with our own new work situations, Toms been getting his recording project “Mirror Man Recordings” and I’m in my first year of being self employed as an illustrator/running a small clothing label (Pyre Climber) with my better half. Luckily we’re both able to duck in and out so we’ll be back on it once everything’s settled down a bit.

(((o))): You are one of the people behind CHUNK, tell us a bit more about it. Who’s involved and how does it operate?

Ahhh Chunk, yeah it’s been a great couple of years since getting into the new space, we’re a collective based around a practice spot which can occasionally house gigs. There’s 40 odd members who share the rent on the building and we runhorizontally so there isn’t any leadership to speak of. Really fun way to run things and although it’s a lot of work sometimes the good has well outweighed the bad. Now that the rooms are fully decked out we’re just keen to get as many folks involved as we can really, there are a couple of electronic nights that have taken residency down there (Slut Drop and Come Thru) who both promote positive parties/a fairer gender balance and the diversity in genres down there is getting pretty staggering. It’s been a real eye opener to have so many folks from different corners of the local diy scene come together, can only speak for my self but it’s opened me up to types of music that I didn’t really know anything about before being involved. At the moment we have (in no particular order) Famine, Beige Palace, Zozo, Unwave, Hex, Thank, Cowtown, Esper Scout, Bearfoot Beware, Irk, Super Luxury, Cattle, Clenstch, Groak, Oil, Ona Snop, The Girlsweat Pleasure Temple Ritual Band, Hamer, Black Gorgon, Bronzed, and new things starting up all the time, pretty hard to keep track of to be honest.

(((o))): I can list off dozens of great bands from Leeds, why do you have such a flourishing scene?

I’m not entirely sure really, we’re lucky to have a few top venues in town which are always working to bring interesting bills into the city, being exposed to so many quality gigs has meant that our local bands are influenced by a really wide range of genres. Temple of Boom have been getting in some legendary crews lately (i.e Drop Dead, Siege and Infest) and the spot is really supportive of their local scene. Likewise the Brudenell/Wharfe Chambers have been smashing it consistently for years so we’re not short of things to look up to. For me a lot of it comes down to how un-competitive things have been around here, everyone pulls in together to help each other out and it makes for a much nicer environment. When I was first trying to get gigs in the city as a nipper it was a lot harder but folks have figured out that if you want to do something it’s better to muck in together and make something for yourself, so good to see the older folks really getting behind those that are just starting out and hopefully that will continue.

Oooh cripes that’s a really tough one, always really enjoy playing so it’s kind of hard to put any of them at the top of the list but there’s been some zingers. For Cattle we had an ace time back in May at an alldayer down at Temple with My Disco and a bunch of other chunkers, the Brussels show with Zozo for Bang Bang bookings was a blinder and our last show before the baby break at Renegades of Chunk II were personal highlights. For Clenstch we were asked to play one of the last Cleft shows at the Brud which was lovely, also had a little jaunt down south in summer and stopped off to play for a handsome lad down at the Unicorn (cheers Rich). For Groak we had an ace time at the first Hearth Life alldayer with Palehorse, The Afternoon Gents, Ghold and a bunch more. Had a couple of bangers down at the Brud with Weedeater, Jucifer and Primitive man. Our stop offs in Prague (Cheers L’u Ba) and Eindhoven (Nice one to Blood Shed) on the last tour were a right laugh and then getting to open up for Dropdead and Siege the other week at Temple topped it off nicely. Gloomweaver has been out of action since our drummer Jodie started expecting but there was a top gig earlier in the year with Dragged Into Sunlight (cheers to Paul Priest and Kam). Hard to be more specific than that really.

Another tough one but I guess my favorite had to be the last minute gig we flung together for dälek the other week. They were so good and were really nice blokes, we were really lucky to see such a legendary squad down at our little space. AlgernonCornelius smashed it too!

So many to choose from, the Cave of Roses lads put on a couple of absolute stunners with Svffer and Mort Mort Mort. Three Trapped Tigers nailed it the couple of times they’ve been up this year. Kind of feels like this year has just been one continuous high quality gig.

(((o))): Best festival?
Haven’t really been to any big outdoor festivals this year, trials of self employment and that but there’s been some stunning all dayers, Ritual was a great first edition and we all had a good catch up at Damnation earlier this month. There was a corker at the 1in12 earlier in the year hosted by Doom which was mint and there’s a special place for the first proper night of Blood Shed fest, such a sick weekend.

There’s been some stunning records this year, “Asphalt for Eden” by dälek, “Razzin” by Famine, “Telefone” by Noname, “Primitive Powers” by Beehoover, “The Mountain Will Fall” by DJ Shadow, “PYR” by Ghold, the “Moloch/Lich Split”, “Looking Wet in Public” by Palehorse, “Disaster Piece” by Flowdan, “Ommadon” by Ommadon, “Impossible Kid” by Aesop Rock,  “Distracted / Suspended” by Unwave, “Lugubrious 7” by Lugubrious Children and some banging ep’s/splits from Biege Palace, Hex, Ona Snop, Nothing Clean, Healing Powers, Komarov, shrykull & Dark Mother. Everyone’s been on it this year, going to be interesting to see how next year tops it!

Ha ha that’s a good question got plenty of band stuff coming up, Groak are on the next edition of Ritual fest with “All Pigs Must Die”, “Misery index” and “The Afternoon Gentlemen”. Cattle will be playing at Fatout Fest with “Blood Sport”, “The Bug vs Dylan Carlson of Earth”, “Pigs x7” and a bunch more. Hopefully get the new Clenstch album finished and I’ve just started a new project with George from Famine, Pete from Milk Crimes and Laura from Hex, no name yet but its shaping up to be dead weird.

Main focus is going to be getting as much artwork done as possible really, been great to have so much time to work on stuff so the main goal for next year is to try and improve my skills, also really keen to do some bigger format work. Will be at a couple of tattoo conventions with the clothing line too so that’s always a good laugh.

I’m guessing I’ll be going to a butt tonne of gigs/taking too much on and chasing myself round in circles. We’re also getting a dog so that’s mega exciting!