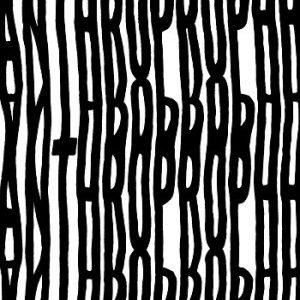 Anthroprophh is the new project for Paul Allen, while it seems that the band he is better known for The Heads are on hiatus. The Heads for anyone who doesn’t know them are a force of nature who took the essence of grunge bands like Mudhoney and mixed it with the joys of sublime UK bands like Loop, Spaceman 3 and other primeval space cadets like Hawkwind and Can. Paul’s guitar was like a cudgel, bludgeoning you repeatedly in to ecstasy with riff after fuzzed up riff.

Here Paul takes us on a journey in to a place that reminds me of 70s dystopian science fiction film when the fear of the machine over taking lives and humanity was a dawning reality to most post war generation. Edges blurred with a haze of late nights, adjusting the tracking on VHS tapes that have been repeatedly rewound and recorded on. Existential electronic passion plays in the feral utopia of how we imagine the past to have been and isn’t anymore. Blurring the works of McKenna, Castaneda, HG Wells, Herzog and all acted out by Charlton Heston and Yul Brynner.

Hermit kicks off like it’s a long lost session from Cosmic Couriers label’s vaults; an out take from a Cosmic Jokers jam session or something that wouldn’t be out of place on Walter Wegmüller’s Tarot. Discretion Shot wonkily sidles along in a pastoral elegance until it is swamped by the sound of swarming electronic bees. The synthy oscillator drones which vibrate the body’s inner frequencies continue on Precession and Ende. Harmoniously in synch and then subtlety and disconcertingly slightly out of phase while they polyrhythmic beats dance their dervish twirls that then bring you back to the essence, the one, the now.

Entropy is a whirling mass of shamanic beats, pulsating atonal guitars, reverbed ghostly shimmers plunging in to the depths of the universe, moving to uncertainty, randomness, breaking down our consciousness, artefacts of unconsciousness coming in to focus from the past but glimpsing the future.

To me one of the biggest joys of the record is the final track We, a chugging guitar riff with a haunting flute spiralling around while a disembodied chant calls like an incantation of the soul that will put a smile of the knowing. Knowing what, who knows but when you hear it you will know what I mean.

Rocket Recordings are repeatedly releasing albums that raise the bar. To me they are invoking a time where labels used to consistently release records that are consistently amazing and you could just go and buy them knowing you won’t be disappointed.

Antroprophh is a joy of a record, a spiritual record that will touch you in different ways. It is a sign of the universe of the Tao, the path and the route to the sounds that are in us.

Antroprophh is released on January 28th through Rocket Recordings.