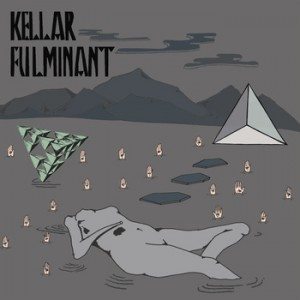 What an interesting word.

I had heard the word before, not in this exact form, but as 'fulminating appendicitis'. This is not a phrase that you ever want, or are ever likely, to hear, unless your appendix - the vestigial, germ-collecting cul-de-sac of the human gut - ruptures. Scary shit, because, as the word 'fulminating' suggests, in medical parlance, the onset of illness is sudden, severe and most often serious.

After I saw that Kellar named their latest album Fulminant, I looked it up to get the real and proper meaning. To see that 'fulminant' is derived from the Latin word 'fulminare' - to strike with lightning - and knowing what I know about Kellar and their particular modes and manners of sonic assault...Let's just say that I can't think of a single, better word to describe the duo and their music.

And, yes, Kellar is now a duo, which is cool and kind of amazing on a couple of levels.

First, the fact that amazes me about Kellar, is that two people can make this much sound with just themselves and a bit of studio technology. They were a trio until around April of 2012 (see the interviews on (((o))) as well as the other Kellar music reviews). I thought that it was pretty amazing that three musicians could make these sounds. Maybe it's because I read the interview with Dan and Andy (by our own Gilbert Potts) while writing this and listening to Fulminant, but I can hear the change in song structure that Kellar alluded to. There is less contention for the listener's ears over the drums, and maybe the single guitar works better. I definitely think that Fulminant is a more accessible, musical (less noisy) album, while still being esoteric and greatly varied.

The second amazing thing, at least to me, is that this music is all improvised. If you have ever tried to do an impromptu speech, or attempted impromptu comedy, you know that it's difficult and easy at the same time - Difficult to make it 'work' and easy to let it suck. Improvisation has largely been the province of the Jazz elite, or at least that is the most well-known sector of the music world where one sees it most often. Improvisational music like Kellar's, sometimes Droney and Doomy, seems like it would be among the most difficult to make, at least from my layman's perspective. In the same interview with Kellar, they assert that, at least for them, improvisation is EASIER than the traditional, scripted, structured song (aka 'normal'). Improvisation means that you are likely to never hear the exact same rendition of a song twice.

And now, my standard disclaimer on when and where I listen to Kellar: While Fulminant is considerably more listener-friendly than most of Beloved Dean, it is definitely music that demands my full attention. This is sit-and-listen music at its finest, and hearkening back to my youth, the type of music that would have been amazing and really cool when paired with certain substances (which I DO NOT condone/condemn in any way). Fulminant is not an album I would play for my wife, unless I wanted her to leave me alone for 90 minutes or so. I would love to experience Kellar's live show as well, since improv is even more impressive live, and who knows? Maybe it will happen someday.

Did I forget to mention before that Fulminant is almost exactly 90 minutes of music? It boggles the mind, at least it does mine, that this album results from some riffs and beats that the musicians bring to the studio. I am jealous and envious to the extreme of that kind of creativity.

I don’t think that I can do justice, with my usual descriptors, to the range of musical styles and explorations, if you will, that Kellar touches on Fulminant. I will state vehemently that it’s much, much more than a collection of Avant-Noise meanderings, and is way closer stylewise to King Crimson and Frank Zappa than it would be to, say, Yoko Ono (the very model of Avant Garde, no?). You’ll hear everything from minor-tuned Fugue thrash to space rock; Precise Metal riffage oozing feedback to Velvet Underground-style devolution into static.

Fulminant is not background ambience, is not for those that just want feel good vibes from their tunes. But if you love Sonic Youth, any sort of hardcore Jazz, long Prog songs, walks on the beach, puppies...Wait, strike those...Take my advice: Buy this album, pour a glass of whatever you drink, put on the good headphones, sit back and listen hard. I think you’ll like Kellar’s latest. Has your old pal Jake steered you wrong yet?