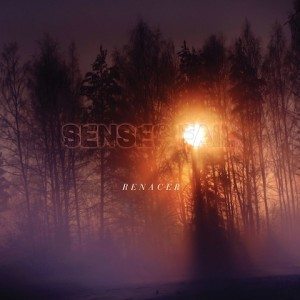 Out now through Staple Records

Formed in 2002, New Jersey’s Post-hardcore favourites Senses Fail have spent the past decade making records that, in the least patronizing way, have fallen under the ‘same-old same-old’ criteria. I mean why wouldn’t they? With the success of their 2004 debut album Let It Enfold You, it’s so easy to continue along the tried and tested, if it ain't broke don’t fix it route giving their fans the top high quality popular Screamo that they have grown accustomed to.

Surprisingly, their fifth and most recent 12-track LP, Renacer, is completely renovated sonically, thematically and lyrically. The album title, translating from Spanish means “to be reborn” and Senses Fail have bravely shed the skin of their former sound and are coming at us essentially with the creativity and freedom of a brand new band who have dispelled of all boundaries to embrace a much heavier and darker musical experience.

Wasting no time whatsoever in alerting the listener to what the album stands for, it kicks off with the title track that just seconds in fans of Senses Fail will either be dying of excitement at the change of direction or crying into their pillows at the loss of slower, emo ridden angst. Substituting former melodic, predictable hooks, with raw aggression, fast paced pummeling beat-downs, spluttering downpicking guitar riffs, monotonous yet growling screams, the lyrics are also different; being a much more personal and profound shared coping experience. “The gate you're afraid to enter holds the treasures you seek.” Begins 'Renacer', a quote by American Author Joseph Campbell, that lead singer Buddy Nielsen explains; “I think it embodies the journey that I’ve been on personally… the best things I found about myself in the worst places within myself” thus, setting the theme for the rest of the album.

Tracks to look out for, 'Mi Armor', their first official single composed of lyrics sung most predominately in Spanish. For those that don’t speak Spanish, the catchy overtly poppish chorus breaks up the heavier, chaotic Spanish Hardcore is in English; “You are the ocean and you are the moon. I'll follow you until the waves come through” reminds us that it is actually a love song and its components are intended to challenge people, exposing them to something new. This is the most self-confessed “marmite” track of the album, but highlights how much Senses Fail have matured musically.

'Closure/Rebirth' is the last “Frankensteined” feel good song they wrote but interestingly, despite its name, is placed as the fourth track instead of an album closure. From time to time I like a bit of a good back story and this track goes as follows: Having had a fair amount of trouble recording this single due to Hurricane Sandy causing flood damage to the ground floor of the building the band were working in preventing them access (luckily the studio was on the second floor and suffered no damage) they then wrote two songs “one really fast that got really heavy and the other one was sort of upbeat but then got really spacey so… we took the parts we liked from each song and made this song 'Closure/Rebirth'. This song again serves an example of the bands embracing new challenges. There are certain parts of the track that embody familiar melodies from previous tracks and the lyrics roar repetitive positive messages asking us to “let ittt goooo”.

Lastly, the inspirational closing track 'Between The Mountains And The Sea' mirrors older Senses Fail and could easily fit in on a typical Taking Back Sunday or Brand New album. Slower, spacious, yet definitely not duller the track opens with sparse, echoing, haunting guitar riffs closely followed by the standard lightly heavier but melodic and monumental choruses Nielsen’s fans have previously grown accustomed to. Poignantly ending with the lyrics “don’t fear the unknown road, what is diamond was once coal” the album wraps up nicely exuberating the continuous theme of not being afraid of what’s to come, discovering yourself, and remembering that “everything that’s good comes out of a struggle.”

With a change in line-up, (original member and key songwriter Garrett Zablocki (guitars) was replaced by Strike Anywhere guitarist Matt Smith and guitarist Zack Roach) a change in producer (Senses Fail went with Shaun Lopez of Deftones, Crosses, VersaEmerge instead of using longtime collaborator Brian McTernan) and a change in the way the band perceive the world, progression, growth and such an extreme change in sound has completely worked in their favour. Whether or not this will be the general consensus is yet to be seen, but it’s always a pleasure to see a band who are true to themselves and their creativity, even at the expense of knowing fully well people might not like it. An impressive effort. Respect!