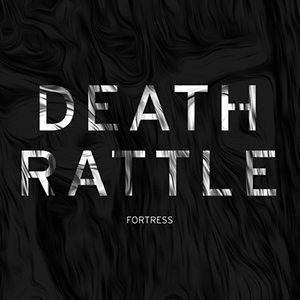 Out now at Frontal Noize.

This new EP from Death Rattle accompanied my thirsty ears while sitting on the balcony in the summer heat the other day. The contrast between the warmth in the air and the chilly atmosphere of Death Rattle's dramatic electro-pop couldn't have been more apparent.

My first encounter with the London-based duo Death Rattle was their intruiging single 'The Blows' which was released earlier this year and served as a warm-up to Fortress. The energetic pace of 'The Blows' immediately catched my attention, so my expectations for their second EP, their followup to last years He & I, were high.

Similar to the Swedish electro-pop queen Fever Ray; the darkness is where Death Rattle most often seems to dwell. There is a very distinct haunting mood to these four tracks, feeding my mind with dystopian-looking visions and constantly painting dark landscapes behind my closed eyes. I'm getting a strong sense of a person walking on a long journey through a dark world where dangers seem to lurk behind every corner; it's as if every sound adds to an inwards-looking-outwards perspective. Both the lyrics and song titles also seem to be contribute to my visionary fantasy world. A fortress being built, ropes tied around arms and a person's fear of being taken away are some of the things going on in these songs. All of this makes the fantasy theme even clearer and the epic highlight 'Fortress' draws all of these elements into a dramatic climax.

Unfortunately though, EPs are what they are; short. Sweet, but short. Just like a short film, Fortress EP only presents a limited narrative. The only way for them now to give me full satisfaction is to continue on their fascinating dark journey with a full length where I hope to hear even more of their potential which is apparent from start to end on this EP. In the meantime I'll be eagerly waiting for them to fully bloom in their darkness.