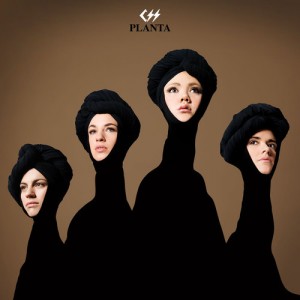 Their moment in the spotlight may have long since faded, but CSS have proved they still have something to offer, albeit with less of a punch than before. Having been a fundamental part of the nu-dance scene back in 2007, with the brilliant 'Cansei de Ser Sexy' (driven by the epic Let’s Make Love and Listen to Death From Above), 'Planta' is the band’s first album in two years and after losing their only male-member in the intervening period, they sound all the more refreshed for it. The cover artwork itself carries an abstract feminist message.

After a warm, but uninspiring opener, ‘Hangover’ is more of a reminds of the sheer sexiness that CSS arrived on the scene with. Brass backs the heavy beat and fuzzy guitars, with Lovefxxx’s vocal ringing out with an untempo melody. “Never had a hangover till you, never had my heart broken till you.” It’s a great pop hook and the track most likely to give the band radio airplay.

CSS are sounding mellower – more of an early evening than a late night band these days, but the warmth that exudes each tracks is alluring. The synth-driven Into the Sun has more of a retro-feel to it, as if Cliff Martinez has been on the stereo during the writing process. Produced by TV on the Radio’s Dave Sitek, it’s perhaps no surprise guitars are given a high place, despite the band losing its guitarist.

Girlfriend confirms that the band has considered ‘Planta’ as a full record rather than a series of songs punctuated with big singles. There’s a natural progression to this album. It’s electro-pop without techno. Gorgeous guitar licks melt the track and again, a catchy pop melody is the driving force.

It fades as it progresses, with the closing few tracks could offer one – heavier beats, faster pace. It just doesn’t encourage you to turn the volume up. This is the band’s most mature album and like almost all of us, as we mature we take less risks, we become comfortable. CSS clearly feel comfortable where they are, and it’s a perfectly nice place to be; it’s just not that exciting.