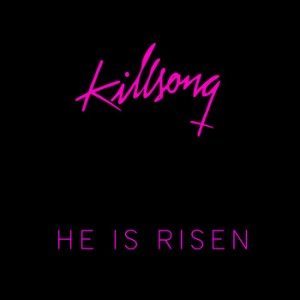 Killsong is perhaps an apt name for a band that wants to do everything differently and that’s certainly the case here. After listening to their debut album He is Risen this Australian oufit might give you the impression that they are a bunch of lunatics but in fact we have to deal here with some very experienced veterans in the Australian experimental music scene. With former members from bands like Squat Club, Darth Vegas, Mr.Bamboo and Jimmy Swouse & The Angry Darts among others, this collective presents a whirlwind of styles in a quite deranged way. Influences from metal, funk, jazz and even spoken poetry are melted into an avant-garde form of music where nothing makes sense in terms of melody, harmony, rhythm etc.

The 5 ‘songs’ are in fact bizarre stories told by the maniacal vocalist Dano, sometimes very hilarious but then again also quite heartfelt. ‘Dear Anthony’ opens with saxophone, waltzing from jazz to blues and some freaky, over-zealous vocals which immediately reminded me of Captain Beefheart but above all John Zorn’s Naked City (with the screams of Yamatsuka Eye). After 3,5 minutes the song suddenly becomes a weird spoken word performance in which the story is told about a lost youth friendship due to the fact that ‘Anthony’ got a girlfriend. It’s hilarious but also very recognisable about the change of people when they grow up.

‘Pissflaps’ Magic Medicine’ is the weird title of a mainly instrumental piece that kicks off with some strange classical chamber orchestra playing again something of a waltz of polka. Next, the band changes gears and it’s back to jazz slowing down the pace. This, rather dark, atmosphere (with the sound of laughing children), is then abruptly slashed by disturbingly distorted laughs and a frantic outburst with wild sax and screaming violins again in the vein of John Zorn’s Naked City. The 2nd part of this piece has some twisted lyrics about rabbits (in fact it says: "Don’t fuck rabbits") and sounds like one rabbit has gone mad in working itself towards an orgasm.

Is that You Mr. Roebuck?’ has some explicit lyrics about…well you should listen yourself. The music again is a kind of whirlwind between jazz, trashmetal and funk. ‘Hotdogs’ is a nod to Captain Beefheart’s period with Frank Zappa (Bong Fury) telling the story of an unhappy guy who, under false pretences  is taken to the red light district in Amsterdam to meet a she-male called Layla Laticia. But when this unhappy guy finds this out he gets so angry that he want to kill his friend and of course the she-male with a…..hotdog!

The final piece ‘He is Risen (slight return)’ is a melancholic, drowned in alcohol, Tom Waits kinda blues played in a piano bar. In between you get the typical Zappa inspired, quick but short sound collages. Finally the piece gets louder and louder with the noise of distorted hammering on a piano first sounding like a child’s toy, repeating itself like the end of an LP, but in the end sounding more like a passing train. A sudden silence marks the end of this twisted journey.

Obviously this album is not for the weak at heart, in fact you must have a very open mind for musical experiments but if you have…..this is a very good album and it makes you definitely look forward to more from this mad and deranged combo.

There’s always a thin line between genius and madness and this certainly applies to this work. Listen and decide for yourself.