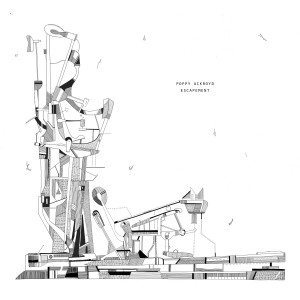 I love reviewing music and I love most reviewing great music. This is the turn of very great music and therefore I couldn’t be happier than this. Being a fan of Hidden Orchestra I discovered Poppy Ackroyd as a member of this great Scottish band and when I heard about her solo experiment I was really curious to listen to it. The result is that Escapement – this is the title of the British artist’s first album – is in each of my playlists since that day.

Poppy Ackroyd is a performer and composer from London who is currently based in Edinburgh that made proof of her artistry not only playing as a member of the wonderfully eclectic Hidden Orchestra but also collaborating with choreographers and filmmakers. Her first solo album, Escapement, is a journey through 7 tracks that in a bit more than 30 minutes is capable to excite the listener, both the attentive and the random one.

There are three actors on this beautiful album: the violin, the piano and the elegance of the artist. The basic idea of Escapement is to melt classical themes, in this case the ones of the violin and the piano, with a post attitude where the instrument complexity of an entire band is replaced by a wide range of field recordings and sound effects. The album, in effect, has been recorded with a single microphone and then edited, manipulated, remixed, and refined on a personal computer by Poppy herself. The outcome of this fusion goes over each expectation since we are in front of an album that consists of the sweet and quiet mood of classical music together with the avant-garde world of the electronic music. That’s why it will be impossible that this album will remain dust covered on your shelf.

The opening ‘Aliquot’ begins with a soft piano introduction and soon the violin enters into the scene adding persuasive moments into the song. The two instruments go together in this quite intro to the album and the protagonist of the song is the unconventional way in which Poppy Ackroyd plays them since she always add something different - can be her hands or the e-bow on the piano strings - to create unusual timbres and textures. In ‘Aliquot’, for example, you have the impression that there is also a guitar but she creates this effect simply plucking the strings of the violin. This is original, this is art.

The following ‘Rain’ is one of my favorite songs of the album. A masterpiece! ‘Rain’ opens up with the sound of rain and gently the violin steps in between the sound of the drops falling on a surface. Violin and piano sound grows up in a rhythmic crescendo till achieving a peak from where the piano softly leaves the scene to the violin. This is an everytime and everywhere song. It’s suitable to a wide range of situations, is relaxing, is moving, alone in your room or in a bar full of people. ‘Rain’ is perfect in each situation. The perfect soundtrack to a driving journey on an empty road. This song can have each shape you want, it’s up to your imagination.

I saw Poppy Ackroyd live at the Denovali Swingfest event at London's Scala last April and when she started playing ‘Seven’ all the people was astonished. Her picking on the piano strings is the proof of her artistry. Really unforgettable. The only pity is that it was too short. The cinematic ‘Glass Sea’ will blow your mind with its continuous changes in the rhythm. This song is like a overwhelming wave. Just let ‘Glass Sea’ seduce you. ‘Lyre’ is a densely emotive work. It’ s a simple song, built on a few notes performed on the piano, and really minimalistic. But even from this simple approach Poppy Ackroyd has been able to realize a song so deep and so powerful that no one listener could remain indifferent. It’s your song, the one that will bring you to talk with yourself.

‘Grounds’ and ‘Mechanism’ conclude the album and I’m particularly fond of ‘Grounds’ since it was the first song I heard from Poppy Ackroyd music as a solo artist. It was love at first listening and, as all first loves, I won’t forget it. This track is gentle, evoking and hypnotic. The rhythm won’t leave your mind even when the song will finish. Field recordings are also used in this last song. ‘Mechanism’ closes the album as a celebration of all the techniques that Poppy Ackroyd uses on Escapement. The violin tapping is the undisputed protagonist of the song and the field recordings add the rhythm to this already rhythmic track. It's a beautiful end for a stunning album.

Escapement has been released last year and now it will have a full physical release through Denovali Records. I recommend this album to anyone who is a fan of music. With its seven tracks of pure and simple music, Escapement is an experience in which the music returns to be more an art rather than an entertainment.