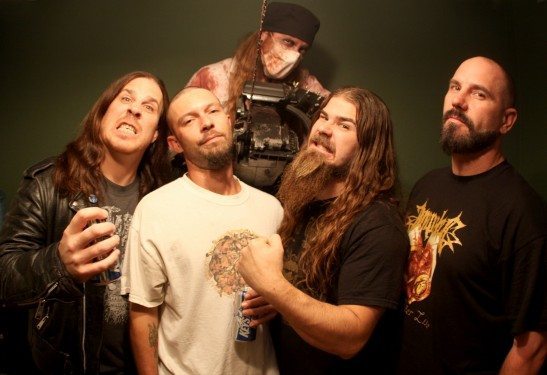 Exhumed are a force to be reckoned with. Hailing from San Jose, California – they’ve been around since 1990 and despite many line-up changes have been delivering a steady flow of gore grind, death metal, and overall brutality since their birth. The band is currently comprised of members Matt Harvey (vocals, guitars), Rob Babcock (bass, backing vocals), Bud Burke (guitar, vocals), and Matt Hamilton (drums). They’ve toured everywhere you can imagine and just recently spent several months in Europe promoting their new album Necrocracy (reviewed here). They’re gearing up for a fall tour with Dying Fetus and Devourment, check them out if they’re coming to a city near you!

Matt Harvey was nice enough to (virtually) sit down with Echoes and Dust for an interview covering topics ranging from musical influences, to long walks on the beach, to Mercyful Fate vs. King Diamond. Read on and get to know the man behind Exhumed.

(((o))): You spent a few months touring Europe with Exhumed, what were the best things about coming back home to America?

Matt: Europe is awesome, and the shows are usually really good, so it's the little things you end up missing the most. For me, it was all about food and convenience. As much as I hate big box chains in general and Guitar Center in particular, it's great knowing that every major city will have a giant store full of the picks and strings and shit that you need. In Europe, everything is independently owned and it's difficult to know in advance if they'll actually have the particular items you'll need. We spent over two hours in Spain going to different music stores until we found the gauge strings we use – and they only had two or three packs, when we could have used say, ten.

Certain places in Europe do have really good food, Spain especially, but there's not any real Mexican food over there. The closest I've found was in England of all places. Also, I like to cook a lot at home, and not being able to do that for four months was a bit of a bummer. Every day off, we were at the grocery store and BBQing. The other thing I really missed was American sports. Watching highlights on the web just isn't the same. I'm glad we got home in time for football season, even though as an Oakland Raiders fan, I may not have too much to look forward to this year. Of course you miss your friends and family and your own bed and stuff as well, haha!

(((o))): How was the touring over there this time around? Most memorable show? Do you have a favorite place to play over there?

Matt: We always do the best in Eastern Europe it seems like. We did three shows in Romania that were insane, Paris was awesome, Cork in Ireland was really fun, Malaga in Spain was great, Serbia was cool, and the fests that we did in Holland were both excellent, and Obscene Extreme Festival and the after-party were probably the highlights of the whole tour. My favorite places to hang out are the UK and Holland, simply because it's so much easier to get around and stuff in those countries, but I love the Czech Republic and Eastern Europe to play in. Every place seems to be getting a little bit better for us to play since last year though. Every place we returned to was better than the time before, which is a good sign, haha! 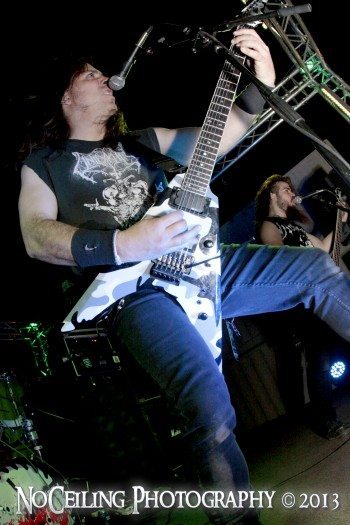 (((o))): Who are some of the bands and musicians that have influenced your playing and style over the years?

Matt:  Man, there's all kinds of stuff. The main guitar players I've always looked up to are James Hetfield, Adrian Smith, Matt Olivo, Bill Steer, Buck Dharma, Eric Cutler, Chuck Schuldiner, Greg Ginn, Gary Moore, Scott Gorham, Uli Roth, Piggy, Tommy T. Baron, Kevin Shields, Thurston Moore, Gary Holt / Rick Hunolt, Jesse Pintado, way too many. As far as bands and shit... I mean in the beginning it was all about Napalm Death, Repulsion, Terrorizer, Carnage, Carcass, early Death, Possessed, early Obituary, Bolt Thrower, Autopsy, Siege, Extreme Noise Terror, S.O.B., Sore Throat, and bands like that. Then we kind of worked in more influences from the 80s like Slayer, Cryptic Slaughter, D.R.I., Kreator, Venom, Sodom, Metallica, Exciter, that kind of stuff. We also have a lot of influence from NWOBHM and traditional metal like Tygers Of Pan Tang, Tokyo Blade, Tank, Angel Witch, Armored Saint, Judas Priest, Maiden, etc. as well as powerviolence stuff like Infest, Crossed Out, Despise You, Assuck, etc. It's a pretty varied bag really, though, because we listen to all kinds of music from pop to country to shoegaze to hip-hop to psych and garage rock. All of those influence our songwriting and arrangement ideas in their own way.

(((o))): From reading many different reviews of the new record, it seems it has been extremely well received. What are your favorite aspects of this record as opposed to records you’ve put out in the past?

Matt: I think the songwriting is getting better, more focused and accessible. We really try to make things as poppy and hook-oriented as possible within our style. I know that kind of scares people when I say it, but the riffs and everything are still totally Exhumed, but the way we put our songs together has more in common with pop music than something Suffocation might do, where it's more through-composed. I'm just into big hooks, whether they're country or metal or pop or whatever.

(((o))): What are some of your other interests aside from music? What kinds of things do you get into when you’re not touring?

Matt: I like to read a lot, I read comics (and regular books), watch all the nerd-appropriate tv shows like Walking Dead, Game Of Thrones, etc. I love the Oakland Raiders and the SF Giants, I like cooking – long walks on the beach, candlelight dinners, haha! Sorry this was starting to sound like a personal ad. I'm always working on different musical shit, putting together a traditional metal thing called Pounder slowly but surely, and a more shoegaze-type thing as well. Plus I've been working on a super-hero comic book script over the last few months, so trying to do something with that. I also collect records, comics, super-hero toys from the 70s and 80s... You know stuff that chicks really dig, haha!

(((o))): What’s in store for Exhumed in the next year or so? Ready to be back on the road with Dying Fetus

Matt: Almost! I'm glad we have a little more time off, the four month trek was pretty exhausting, but give me one more week of great sleep and daily showering and I'll be ready to go! The Dying Fetus / Exhumed / Devourment bill is gonna be pretty nuts, we're excited for it. We have two shows with Carcass in LA before that tour starts and we're going to Denmark for a one-off gig with Convulse, Entrails, Pentacle, and Death Strike next week, so it never really stops – just slows down for a minute or two, haha! 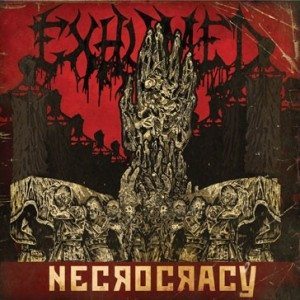 (((o))): Denver Black Sky looks like it’s going to be a killer event. Any bands on it you’re looking especially forward to performing with/partying with?

Matt: It's going to be a total blast. So many cool bands and people, we love the Speedwolf guys, and Exhumed / Ghoul together has been LOOOONG overdue. Iron Reagan is great, and I keep hearing really awesome things about Power Trip so looking forward to checking them out. Seeing Skinless together again is a really special treat, love those dudes. The real challenge will be just staying sober enough throughout the day to do a good set, because the line-up is so good and we're at a fucking brewery!

(((o))): If you could create a fantasy lineup of bands to play with (past or present bands), who would be on the bill?

(((o))): Who are some of the newer bands out now that you suggest our readers check out? Seems like there have been a lot of new up and comers in the last few years.

Matt: The scene seems to be really healthy. We toured the UK with a great Death / Thrash band called Seprevation that I really like a lot. Kind of in the Sadus / Death / Kreator vein, just really fucking aggressive. We played with a couple good bands in Spain as well, Teething, who are more of a power violence / grind thing, and Maniac which is more of a black / thrash band, both ruled. I love some of the new trad metal, like Enforcer and In Solitude as well. Speedwolf from Denver is a great newer band, kind of Motorhead / Venom influenced.

(((o))): Last but not least…Mercyful Fate or King Diamond?

Matt: Love them both, but Mercyful Fate will always be #1 in my heart. Don't Break the Fucking Oath!!!

Photos by Val. Visit her NoCeiling Photography Facebook page here and give it a like while you at it!