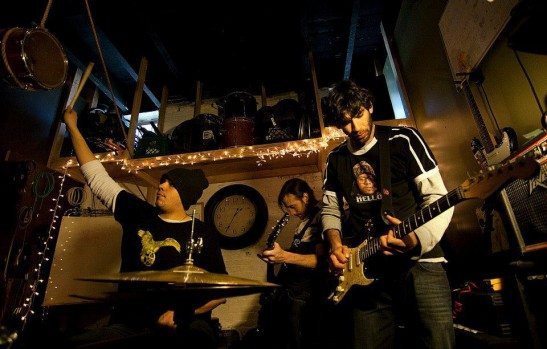 Disarmingly human and emotionally charged noise/punk rock from the heart of Brooklyn, New York, EndAnd have been gaining feverish word-of-mouth since the Summer 2012 release of the uncompromising Adventures of Hi-Fi in Space. Now with their second album, Mechanics & Energetics of Stilt-Running, EndAnd explores an even more visceral and aggressive sound. Grayson Hale had the opportunity to ask vocalist/guitarist Daniel Fern a few questions about the new record and what makes it so extremely personal.

(((o))): Hi Daniel! Firstly, please tell us a little bit about the history of EndAnd. How did the band form and what were your motivations for starting the group?

Daniel: Hey! EndAnd began after I recorded a demo back in 2005.

I moved to Brooklyn in 2007 and attempted to find a place closest resembling the free community spirit of the Desert Sessions. It took a while, and after a stint in a band called The Stoics, I found King Killer studios, around late 2010. I worked on my craft most seriously then, with a collective of musicians that later became Generator Ohm, The Stink, We Are Augustines, Scrapers, TinVulva, Morgans, Switchblade, Capita Clip. These are all residents of King Killer that I directly worked with in one way or another that contributed and formed EndAnd. Mostly it's Mike Morales and myself. We had Bill Fitzgerald as a bassist. Ernest D'Amaso and Sarah Soller Mihlek, not to mention that Dan Kramer played bass on Adventures of Hi-Fi in Space. I started this group with the idea that everyone plays everything. Everyone plays with as many musicians as possible. A complete and constant conduit of musical output. That was something always missing greatly from my life. Here there is such a versatile, powerful and inclusive niche that it's wonderful. It was very hard to find in such a big city. Ironically. Under this community EndAnd thrives no matter how few or many we are.

(((o))): Is there a meaning behind the name EndAnd? How does it reflect the philosophy of the group?

Daniel: The meaning is a simple one: that sometimes it is hard to differentiate between when something actually begins and defines something, to when it ends and essentially disappears. The idea of being and non-being and the idea of contradictions. It's not supposed to represent any philosophy that the band practices. We are not idealists, we just want to play music.

I wanted another name and couldn't shake EndAnd since it's been with me for a long while and I couldn't come up with anything. It seems any band's name is expected to define that band and that is so annoying to think about.

(((o))): Congratulations on your latest album, Mechanics & Energetics of Stilt-Running, it’s a really great release. This was an immensely personal album for you, would you mind elaborating on why that is?

Mechanics was written and recorded immediately after Adventures of Hi-Fi in Space during what would be a defining time in my life where many scenarios that had to be dealt with were being concluded. My illegal status as an immigrant, my chronic muscle tension and depression. My fathers passing. Just one of those times where a lot of things that were brewing for a while happened in a short period of time.

When I say concluded, I mean these are things that I think I finally managed to deal with. Life of course always keeps moving.

(((o))): What made you decide to touch on such personal themes?

Daniel: Just circumstances. I usually write about my life anyway. I was also getting real tired of not being acknowledged as a legal human being after being here for the majority of my life. I was hoping maybe to gain some acknowledgement to the tragedy that is the American congress and The Dream Act.

(((o))): There are some rather ‘poppy’ melodies in some of the tracks that seem to contradict the dark subject matter. Is there a reason behind this?

Daniel: Absolutely there is. I love noise, but melody is key. Bands like Polvo do it right. Without melody in my opinion there's only posturing. Music is evolving (or devolving) into "art" instead of music. Granted melody doesn't have to be pop, but it just seems appropriate in songs like 'I Love You Soon', to sing a poppy song that sounds like a love song, but really reads out an empty promise to love a person one is not yet ready to love. So these types of contradictions are on purpose. I think they get accentuated that way.

(((o))): Speaking of pop melodies, Mechanics... crosses quite a few different genres in its 20-minute runtime. Was this a conscious decision or did the music direct itself? What were some of the musical influences that shaped the album’s sound?

Daniel: To the most part nothing is premeditated. This point of my life naturally led me to write off shoots of hardcore punk. I was never a hardcore punk listener. Shortly after the album I discovered that I like Germs and Circle Jerks. Also, we were coming off of a significant momentum with Adventures and I felt that album didn't really define our sound. I was just in a state of ‘go go go’! As to the different genres. I'm happy that apparently I'm not as repetitive as I thought. I didn't go into this thinking, 'I'm going to give them metal, punk, rock, pop!'. I just wrote what I felt. We got some reaction with Adventures where some critics commented that it crosses many genres. Therefore we are still finding our sound. At the time of Mechanics I wasn't listening to much. Funny enough I listen to a ton of hardcore now. 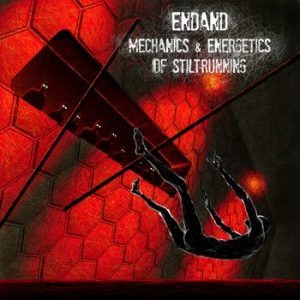 (((o))): What is being represented in the album art and in the title?

Daniel: Uncertainty, and a bit of comedy?

The name emerged after some King Killer crew sat and discussed who would win. A running person on stilts vs a regular runner. We also found an article online. 'Mechanics and Energetics of Stilt-walking' so there you have it. As to the art itself. I told Steve Woodzel the title, themes and lyrics of the album and asked him to do whatever he felt. He is crazy talented. He's also the composer of the kick ass soundtrack to the hit iTunes game Color Zen and is a member of Generator Ohm. He also helps me with web pages. He rules!

(((o))): A question that I have been personally pondering over a lot recently is whether music based in negativity has an overall positive or negative effect on people. I realise it’s completely subjective, but I wanted to hear your opinion on the matter. Is it cathartic or is it destructive? Do you find Mechanics... to be an inherently negative or positive record?

Daniel: I think inherently this is a negative album such as it deals with negative subject matter. But negative and positive is subjective of course.

Emotions are basic and anger and sadness needs to be expressed just like happiness and joy. I try to put all my excess negativity in music so that I may not take it out in my everyday life when dealing with people. If you listen to non-stop hardcore punk, metal or whatever might happen to have negative subject matter, you will feel it for sure in your every day routine.

When I'm angry, it's comforting for me to listen to Pissed Jeans. When I'm melancholy, My Bloody Valentine. Sometimes it's a bit more complex than that and I'm not sure why I listen to what I do, when I do.

But you certainly won't find me listening to The Beach Boys when I'm pissed off. I think everything has its time and place. When I'm angry, I find myself playing better, but it doesn't mean I enjoy going to said shows angry. I feel like I'm ill prepared that way.

(((o))): What’s up with the album’s short length? It’s very effective, but is there a reason for keeping it so brief?

Daniel: I was a bit worried about the length. It wasn't on purpose, things were happening quickly, and I reacted to that. I felt like I had to close this chapter in my life immediately. Of course we just recently wrote a song that is not unlike 'Vessel', but I think a few more are coming that will hopefully exit that premise. I go with what I have. That being said, I'm happy you find it effective!

(((o))): What does the future have in store for EndAnd? Where would you like the project to go?

Daniel: We would love to finally tour. We were supposed to go last year, but circumstances left us immobile.

It'd be nice to finally give this our all and see how we do on a real long tour.

(((o))): Thanks for taking the time to speak with me! Is there anything else you’d like to add?

Daniel: Thanks for your interest!