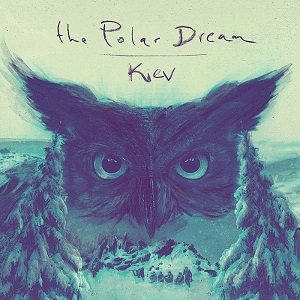 Lately Post-Rock has become one of the favourite ways that new musicians use to express their feelings; often inspired by Explosions In The Sky, Mogwai or Sigur Rós they decide to take an instrument and create music that flows from their soul. The problem is that as they take the same bands as influence many bands sound very similar and becomes really difficult that one band shine among them all.

Fortunately there are some musicians that look beyond the genre and look for a way to strengthen their project daring to experiment with other styles and influences until they find the sound where all of them melt and become a record that really worths listening to.

One of these bold bands is The Polar Dream from Guadalajara that with hard work have won a fine amount of followers and the respect of Mexican media. They released Kiev, their second album, on May of this year.

Kiev is a well planned album where The Polar Dream's members turned the 10 tracks that are part of this album into a sound trip that has no equal. It took them around two years to produce this album mainly because there was a change in the band's line-up and they decided to take the sound that defined them in their past albums, break it into small pieces and then rearrange it from a new perspective. In this record The Polar Dream keep making the music that distinguished them from other bands but now mixing it with other kind of rythms, playing some atypical instrumens and even some old toys that as a whole develop fresh and enjoyable music.

In Kiev we find relaxed music, clearly oriented to the ambient side and getting away from the classic Up-Down-Up of Post-Rock, as a result they deliver perfectly symmetric structures , it does not mean that the album is plane but that it has perfect balance in all of their songs and all of them are exactly where they have to be.

All the songs in this album are composed with a base of piano. Guitars, xilofono, desk bells and some other instruments that provide soft atmospheres while bass and drums give the perfect amount of strength and noise in the right place of each song. At the beginning the songs are a little bit "aggressive" with 'Intro', 'Falling Birds', 'Horses', '1806' and 'Owls', then it starts slowing the intensity until we find the last song, 'Goodbye', where a solemn melody and the mantra styled chorus surround us and closes the album in a magnificent way.