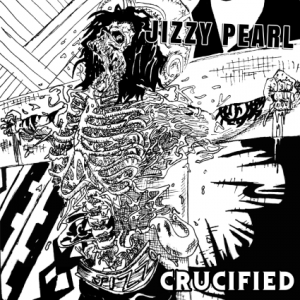 Out now through iTunes

There are few things better in life than re-living one’s youth and through metal a lot of us are able to do that every day. Sure, most of us don’t have the hair, the earrings, or in some cases the hairspray anymore but nevertheless sometimes something comes our way that creates an instant flashback to the bygone days of zero responsibility. While I was perusing the Ech(((o)))es and Dust submissions I came across a new promo from one of my all-time favorite guilty pleasures, well, the singer of one of my all-time favorite guilty pleasures anyway. Jizzy Pearl, former singer of Love/Hate is releasing a solo album, when I saw this I was instantly transported back to 1990 and cruising around town with the windows opened and blaring 'Why Do You Think They Call It Dope'. The album Blackout in the Redroom was one of my favorites at that time. It was the simplicity and stupidity that initially drove me to the album but as I listened more and more there was, at times, something deeper to the songs themselves. This feeling only increased in my opinion with the 1992 album Wasted in America a very nice compliment to their debut album. But alas, as with most of the Glam bands of the ‘80s and early ‘90s grunge and internal infighting made Love/Hate no more.

So how does Jizzy do on his own? Well, I had high hopes and little confidence in what this album would sound like. But in complete honesty there are some very good things on the album; Crucified is a solid mid-tempo rocker with a really good guitar solo and a pretty catchy hook associated with it and it has the feel of the old school sound that I grew to love from this band. The opening track 'Hanging You Out To Dry' has the proper Jizzy Pearl lyrical liberties that make this album fun to listen to and try and translate. I mean who else remembers the lyrical gems like “She’s a knock down blue eyed slut psycho virgin tease” from the song 'Rock Queen'? Jizzy does not let us down on this little album either. But in fairness Jizzy does stay true to the blues sound that was the foundation of Jizzy’s previous band.

It did come as a surprise but this 6 song album gets better and better with each song and there really is some potential to these songs. Plus, even though I have jokes, there is some interesting musical directions in a few of the songs and Mr. Jizzy at least tried to expand the sound of his music. The overall likability of this album is that it still sounds like an album that Jizzy’s previous band would release and it does take one back to the early ‘90s. For as much as the temptation had to be there to mess with the sound it seems that restraint won the day, which is nice. Songs like 'Love is All' and 'You’re Making Me Nervous' show some promise and the lyrical content and concepts are fun.

Look, much like it was back when I had a mullet, four earrings, and wore nothing but black concert shirts, black jeans and converse high tops sometimes we have to grow up. By the sound of this album Jizzy and his band (whoever they are) have done just that. Crucified allows you to be a little nostalgic of the past while enjoying an album with a little bit of a current sound. I say give this little album a chance if you liked any of Jizzy’s previous band’s albums even a little.