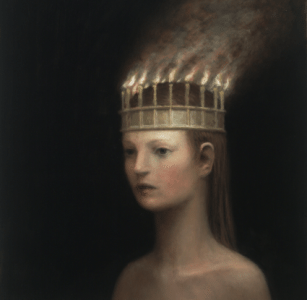 Out on February 7th through

On Mantar’s debut LP Death By Burning, the band invites the listener to an apocalyptic wasteland of heavy riffage. The album only has one rule: bang your head or die. Mantar were birthed in only 2013, but they exhibit the proficiency and range of genres of a much, much older band. For all their heaviness and fury, Mantar is composed of only two members. Hanno provides the shredding guitar and primary vocals, while Erinc bashes away on drums and provides supporting vocals.

Half Turkish and half German, Mantar hail from Northern Germany. Their sound defies the need for a label, but it could be best described as black metal distilled Motörhead with a penchant for doom and sludge metal. More than anything, Mantar sounds like nothing but themselves.

The album opens with 'Spit', a lengthy and varied Mad Max anthem that builds into a fist pumping conclusion as Mantar howls, “Burn the witches, one by one!” This rallying cry sets the stage for the lyrical themes throughout the rest of the album. Hanno’s verses are marked by apocalyptic destructiveness and relishing the expiration of mankind. His vocals perfectly match the guitars and drums, making for an album that sounds like the soundtrack to a collapsing building.

Mantar rev up their engine on 'Astral Kannibal' and kick the guitar progressions into high gear. The song is the most rock and roll the band gets on Death By Burning, and is a fitting transition into the next section of the album. 'Into the Golden Abyss' enters with a floor tom pounding intro that leads into a sludgy midsection, with Hanno howling over the discord. The song is an eyebrow raiser that throws all pretenses of Mantar out the window. 'Into The Golden Abyss' makes it clear that the band doesn’t exist to fit into a mold- they are here to pommel this listener with every once of aggression they can conjure, regardless of genre.

The next three songs constitute a narrative in three parts- 'The Berserker’s Path' utilizes spoken word to set up a story about a destructive force hell-bound on ruination. 'The Huntsmen' and 'The Stoning' are hard hitting romps that seamlessly blend elements of black metal, hardcore and sludge. The trio serve as a transition to the final part of the album, which includes two incredibly heavy songs that perfectly cap off Death by Burning.

'White Nights' is followed by 'March of the Crows', both sludge infused tracks that feel like a march towards hell’s gate. 'March of The Crows', at nearly eight minutes long, is reminiscent of Sleep’s heaviest offerings.

At the hands of the incredibly well equipped Mantar, the infusion of black metal, sludge, hardcore and doom seems effortless. Death By Burning manages to stretch nearly 45 minutes, but the constant variation in style and heaviness make the album an incredibly enjoyable listen. Although Mantar aren’t necessarily rewriting the book on the genres they employ, Death By Burning is an endlessly heavy album that bodes nothing but good things for the duo’s future.