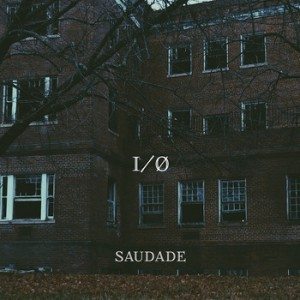 The term "saudade" is of Portuguese origin, but it does not have an exact translation in English. The word implies a profound feeling of nostalgia or longing for something or someone. The band I/O out of Boston, Massachusetts chose Saudade as the title for their first full length album. That implication of melancholy runs throughout Saudade, and reinforces I/O’s understanding of their own music: strong, youthful post-rock with a surprising emotional depth.

I/O came together by a series of random of events. Originating everywhere from the USA, Australia and Thailand, the members all met while attending school in Boston. Despite their geographical diversity, the group’s talents come together to form a cohesive and balanced final product. The elements of a post-rock group must work together in harmony and I/O’s music exhibits this well. Though they are a young group, ‘Saudade’ is a prime example of all the pieces fitting together.

The album opens with a trio of songs that serve as a spacious introduction to Saudade. Angelic synths build on 'Lakehouse' towards the second track 'Twins'. The delicate opening deceives the song’s next movement- a heavy hitting middle section that transitions between coursing guitars and heavy bass lines. The song returns to its quieted introduction before slipping into the not-so-coincidentally titled 'Input/Output'. This is the longest track on the album at just under ten minutes. No time is wasted throughout 'Input/Output', however. It is structured similar to 'Twins', but has a tendency to move in a more patient yet no less powerful manner.

What becomes apparent in the album’s opening series of songs is just how equitable I/O is as a group of musicians. There does not appear to be a so-called “lead guitarist.” Instead, Tyler Hicks and Teddy Murphy trade off lead guitar parts throughout the album. There are points where both guitarists play separate lead parts that intertwine to create an extraordinary progression, such as on the track 'Weather Fields'. Chatchon Srisomburananont’s fantastic, taut drumming sits perfectly amongst the group’s other elements. Most of all, I/O ensures that the bass, played by MacKenzie Tate, has a distinguished place in the mix as well. Auxiliary percussionist Sean Camargo was added to the group after Saudade was recorded, but his presence is sure to be welcome in the future.

The fourth track, 'Noise Floor' marks a shift in the album’s tone. 'Noise Floor' finds I/O changing gears from something similar to Explosions in the Sky to something more like Caspian. Although they list these groups as strong influences, they do not allow their influence to be overbearing. The vibes on 'Noise Floor' become the defining characteristic through the rest of the album. Complex, reverberating guitars sway above charging bass and flourishing drum progressions. What’s more, nearly every guitar progression is catchy and acts as a defining characteristic for each song.

For such a young group, I/O bring an extraordinary amount of talent and know-how to the ever-growing post-rock scene. Despite Saudade being their first album, the group manages to balance all the elements necessary to formulate an extraordinary, cohesive collection of songs. Whether it is the rain drenched streets of Boston or the vibrant geographical origins of the band’s members, everything about I/O’s Saudade works. Very well.