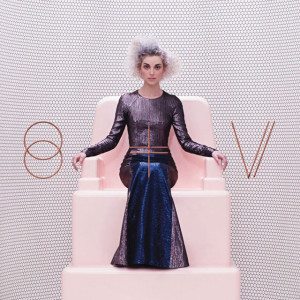 Out now via Loma Vista

Annie Clark has always been a rather special songwriter. Gifted with a rare ability to synthesise her diverse musical tastes into startlingly original pop music, Clark has, under the St. Vincent moniker, created works of genius before (large parts of previous records Marry Me, Actor and Strange Mercy) but, perhaps surprisingly, her collaboration with David Byrne on 2012’s Love This Giant was somewhat inconsistent. Perhaps it was simply the result of pairing two remarkably creative minds in the same studio, but Love This Giant lacked a little of the long-term reward that Clark’s previous records have offered in spades.

With her collaboration with Byrne also raising her mainstream profile, Clark’s new record, her fourth, could have seen the artist carrying more pressure on her shoulders than ever before but this record doesn’t indicate any such issues. From the fact that it’s a self-titled offering to the breezy air of its opening tracks, St. Vincent is almost distressingly effortless in its brilliance, distilling Clark’s talents more potently than ever before.

It all starts with ‘Rattlesnake’, as confident an album opener as you’ll ever here, kicking off the record with Nintendo-esque synth squelches and one of Clark’s typically unusual lyrical gambits; “Follow the power line back to the road / No one around so I take off my clothes / Am I the only one in the only world?” By the time the song reaches a climax it has taken more than the odd left turn, yet equally has somehow remained eminently accessible throughout. This is a trick Clark has managed before, but right from the start, St. Vincent reels off enough memorable motifs and lyrics to suggest that its creator is literally overflowing with ideas.

‘I Prefer Your Love’ is a slow-burning anthem of the highest calibre, whilst ‘Regret’ and ‘Psychopath’ sound like perfectly judged visitations to aspects of Clark’s songwriting that she’s not quite perfected before, and ‘Bring Me Your Loves’ is a rubbery blast of unfashionably funky pop. Even the closing pair, ‘Every Tear Disappears’ and ‘Severed Crossed Fingers’ manage to leapfrog accusations of Bowie fandom despite splashes of Hunky Dory being unashamedly draped across them.

It could be said that St. Vincent lacks some of the more esoteric flourishes of any of Clark’s previous records. There are touches of experimentalism all over this record, but they are, in general, less brash and obvious than on previous albums. It’s St. Vincent streamlined, and to an extent redefined, by the newly focused pop aesthetics Clark has decided to play with. Thus, whilst St. Vincent records have always been bonkers, fun, moving, and almost criminally sexy, this record accentuates those facets of St. Vincent as a project more adeptly than ever before.

Of course it’s too early to estimate quite how St. Vincent will go down in the long-term but, on the evidence this review has at their disposal right now, this might be the bona fide classic that Clark has always threatened to produce. Featuring eleven songs of the highest quality, subtly showcasing a wide variety of stylistic interests and intents, St. Vincent is a songwriting tour de force of the highest order.

As for Annie Clark herself? Well, above all St. Vincent has confirmed long running suspicions that she is one of the most singularly brilliant creative figures in the world of popular music today; an artist of the most universally essential kind.