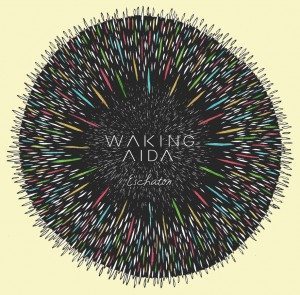 Eschaton is Waking Aida's debut album.  It was released on June 2nd via a wonderful collective called Robot Needs Home.  Incidentally, this label come management company come van hire company was set up by Maybeshewill in order to release their first E.P. back in the day.  In it's entirety, Eschaton was the first full length release to come out on Robot Needs Home.  Firsts all round then.  In the words of my friend Mr. Samuel Jackson, hold on to your butts.

The listener is delicately introduced to Eschaton via the 'Intro' - a small snippet of swells and distorted loops that build up rapidly before cutting out to reveal 'Incandensa'.  A distinct contrast exerts itself immediately.  The etheral guitar swells present in the 'Intro' (swells of the sort that instantly make me think postrock) clear to reveal a warm, funky bass line, that joyfully frolics up and down.  'Incandensa' is full of surprises.  There are relapses into half time, changes in tempo and time signatures, rimshots and tapping, as well as massive contrasts in dynamics, textures and tones.  Styles seem to fuse, and the instrumentation becomes vibrant.  Towards the end of the song, there is even a vocal sample of a rather philosophical American woman talking about beauty and whatnot - very atmospheric and uplifting.  It is evident from the off that these boys are a talented bunch who want to push the blurry barriers that govern genres like postrock.

'How To Build A Space Station' is the third track on the album.  Again, a fresh canvas is immediately installed.  The guitars are given a new lease of life, whereby they playfully puncuate flowing melodies with stabbing staccato rhythms and flurries of finger tapping reminscent of This Town Needs Guns.  In places, the drums are almost samba-infused.  Elsewhere, they enter a straight forward, almost punk pattern that ceases to stop driving the instruments in new directions.  Another break into half time brings with it that huge epicness that Waking Aida so easily achieve.  Small injections of percussion, like the tambourine and glockenspiel, really make 'How To Build A Space Station' stand out.  There always seems to be something new for your ears to latch on to.  Oh, and there's even a rallentando at the end - what more could you wish for?

Cue another vocal sample.  This time, what is perhaps the briefest sample in the history of postrock samples introduces the fourth track 'Time Travel With Friends'.  Again, the song brings with it something entirely different from the others.  There are a couple of dodgey nineties-sounding synths in there which just sound fantastic.   There is also one monster combination: wood block meets finger tapping meets clapping.  I shit you not.  A drum machine comes in at around four minutes before the song quietly tails off, once again bringing a nice change from the standard huge postrock climax.  It seems like the band are really cutting loose in 'Time Travel With Friends', having a whole lot of fun by playing whatever takes their fancy.

A whole lot of delicate detail becomes top order with 'Matter Fur'.  There are some seriously serene ideas going on in this one.  What I would name the verse is sculpted by a disco drumbeat and a droney backbone of atmospheric richness.  This gives away for what feels very much like a chorus - beautiful chords played on the most clean guitar tone that break down along with the drums, revealing space and silence only to pop back into life again.  The confidence to allow this part of the song to be so simple, especially when it is surrounded by twinkly technical tapping and some crazy mathy play on time signatures, pays dividends.  I only wish there may have been more of this lovely lovely space before the band go into one of their huge riff-tastic adventures, with drums smashing toms and cymbals alike.  A single solitary tambourine lets the listener know that this pretty little ditty is not quite done yet.  There is one final rapid build up to what is arguably some of Waking Aida's heaviest music.

All of a sudden, 'Matted Fur' gives way to this mesmeric, distant and almost ghostly keyboard.  'Your Tiny Voice Is Booming'  seems like its going to be another slow burner.  The listener is deceived - the keyboard starts to pick up the pace before the drums announce themselves with some furious clickyclacking on the rims.  There is a cyclic nature about this song.  It spins rapidly around the same few notes over and over.  As a result, the keyboard part almost becomes like a drone, with the guitar parts cutting sharply across it to give colour and variation.  Again, the song takes a twist, with a change in tempo and dynamics.  Two guitar parts weave in and out of each other, and the drums and keyboard lull.  Textures begin to build, becoming beautifully rich with the addition of some incredible sounding violins.  As to how much these songs were influenced by the likes of Maybeshewill, and perhaps even Talons with them lovely violins, is hard to tell.  Yet, I'd certainly say that there is something similiar about the work of these two postrock giants and Waking Aida.  That said, Waking Aida are by no means a carbon copy of either, as they continue to prove through the seventh song on the album, 'Glow Coin'.

If you haven't already seen the video for 'Glow Coin', then go here.  It is fantastic - the DIY feel to it and the chemistry between music and images is brilliant.  As for the song, I have fallen in love with it.  Bass guitar and lead guitar forge a relationship through their rich tapping cycles.  The way in which the familiar flow of bass guitar tapping gives way to clean, uncompromised chords creates an overwhelming uplifting feel.  The space in this song is wonderful, and is allowed to stay clear due to the way in which the instruments mimic one another throughout.  This, in turn, allows the most playful atmosphere to envelop the song.  It is not until just over half way through when the drums and guitars explode that the listener is brought back to ground.  Although huge in size and sound, this climax is not all thrashing and distortion.  There is delicacy in some final finger tapping, and lovely cymbal swells bring to close an altogether incredible song.

The last song on the album is called 'This Isn't Even My Final Form'.  Again, the Waking Aida boys seem to have really let loose in this song.  There is a groove that makes you want to throw your head back and fourth, punctuated by small breaks whereby all the instruments cut for a single beat or two.  The feel is not dissimiliar to that of Irish mathrock band Enemies, who are one of the grooviest in the business.  A section of snare rolls and pretty blatent guitar wankery is almost out of character with the rest of the album.  That said, if there is anything that this album has taught me, it is that 1. Waking Aida are bang tidy and need a good thorough listening to, and 2. a good band knows that music is maluable and has the ability to make it evolve, disregarding the rules that feebly attempt to govern genres and bands.