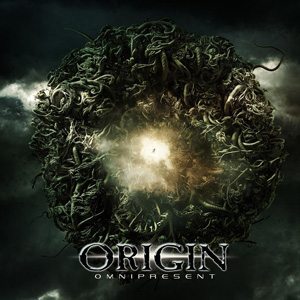 To what extent does an ability to play impact on your ability to write a cohesive song? Tech-death has long been the whipping post of other metal genres, because technicality and instrumental mastery frequently triumph over songwriting, and albums can often feel like masterclasses rather than listening experiences. A few bands over the years have managed to synthesize the two camps, and it seems Origin are finally approaching this point with their new album Omnipresent. For the detractors who found Entity a hard slog to get through, Origin have tweaked their formula, and the result is an album which is marginally easier to digest, but still just as extreme as the band we know and love.

If it weren't clear already, Origin are rather talented with their instruments. Drummer John Longstreth in particular manages to astound throughout the record, showing off his technical flair at almost every turn. Almost; here is where the variety comes into play. For starters, there are some monstrous Suffocation-inspired breakdowns to break up this relentless pulverization the band deliver at a rate of knots, such as the effective one placed in 'Thrall:Fulcrum:Apex'. More intriguingly, there's an abundance of death metal groove which enhances 'Source Of Icon O' and 'Redistribution Of Filth', the latter resembling more Jungle Rot on cocaine than the usual noodling formula. The one downside to this careering roller coaster of tempos is they feel a little sewn together, jumping from one idea to the next without looking back.

Those who may harbor concerns thus far that Origin have lost their noodling touch, fear not: there is still a plethora of moments where the band are heads down, blasting mode engaged. Paul Ryan and Mike Flores make use of every fret in some form or another, whether in sweep picking, relentless tremolos, atonal passages or thundering riffs, the string work is easily as busy as the drumming in the 36-minute runtime. The only times this album lets up are during the haphazardly shoe-horned ambient interludes to divide the album neatly into three parts, although 'Obsolescence' ends up misleading, with the 30 seconds of sci-fi evoking ambient being abruptly interrupted by a blasting section for the rest of the 90-second song. While it cannot be denied that the absence of these ambient interludes would make the album harder to absorb, there are other ways of breaking up an album's flow without resorting to this cliché method.

Perhaps one of the biggest advantages Origin possess this time is they have actually kept Jason Keyser for a second round after Entity, which has allowed for the band to be more flexible in their blueprint. The man's vocals border on inhuman (in a positive way), as can be witnessed on pretty much any of the metallic tracks on the album, whether growling or screaming. The speed with which he growl-raps on 'Thrall:Fulcrum:Apex' is phenomenal, and while he may be backed by both Flores and Ryan, he's still an incredible vocalist in his own right. However, his extraordinary vocals do have a negative impact on the well-written lyrics; even more seasoned death metal ears may struggle to pick out anything more than individual phrases of the misanthropic and esoteric tirades, featuring lines such as “The lid is drawn on the blink of existence/Existence is illusory/Cognizance washed away with a whimper/The essence of war endures.” ('Source Of Icon O')

Stepping up the variety from Entity has done Origin a number of favors, and this time round the dividends have paid off. In some ways, Omnipresent manages to be both a recommended and unrecommended entry point into the tech-death scene: it has enough diversity to not feel like an extreme metal music lesson, but it lacks that spark to make every element meld together coherently. It is, however, an enjoyable listen, and that counts for a lot in this genre.