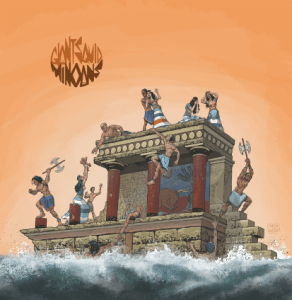 A few years ago I stumbled across and absolute gem of a record. Giant Squid‘s bizarre tale of heartache, loss of humanity, mutation, murder and isolation, The Ichthyologist, was an extraordinary work of genre blending and dynamic composition. I was immediately struck by how diverse yet cohesive the album sounded. It was my favorite kind of concept record, an emotional journey combined with interesting and extremely dynamic music. The follow up EP Cenotes was also quite good but I thought it leaned a bit too heavily on the Middle-Eastern influences within Giant Squid. Because of that minor criticism my anticipation for Minoans was high but tempered by what I thought would be a predictable progression for the band. I was so very wrong about the predictability and blown away by what is the best, most fully realized Giant Squid album to date.

Rather than follow a single narrator like the previous albums Minoans tells the story of the lost bronze age Greek culture of the same name. I whole heartedly recommend listeners read up on the Minoans and the modern rediscovery of their civilization. Through the prism of unspeakable, existential terror of natural disasters and the total destruction of a civilization Giant Squid shines a light on the impermanence of what humans build and it’s hard not to think of our current environmental situation. What will modern humans lose as our seas rise? Will we one day be as forgotten as The Minoans were?

One of Giant Squid’s strengths has always been utilizing a wide array of influences, but not sounding contrived or incoherent. On Minoans they have perfected this formula and concocted an album full of surprising, but not distracting left turns. They continue to explore Middle Eastern tinged scales and chord progressions but in a manner that doesn’t evoke any pretentious world music noodling. The effortlessly move between moods like many bands move between verses and choruses. ‘Thera‘ is an ode to the volcano that contributed to the destruction of The Minoans and combines gigantic, heavy but melodic riffing and driving drums with more somber keyboard and cello driven sections. The overall flow of the song serves to hold up the outstanding vocals Aaron Gregory and Jackie Perez Gratz as they sing about the destruction the eponymous volcano causes. The power and conviction in the vocal performances conjures all of the sadness and terror of the event. As soon ‘Thera’ winds down ‘Sir Arthur Evans’ starts with the simple sound of a pick or shovel chipping away at a mound of dirt. The lurching and vaguely sinister sounding lounge-esque song captures the frustration of the archeologist responsible for uncovering The Minoans doomed culture. The contrast between these two songs is in no way disorienting, instead they contribute to the over arching tragedy and sorrow that surrounds an all but forgotten people.

Giant Squid has taken several steps forward in terms of their overall musicality. The increased attention placed on the keyboards and cello is most welcome and gives the whole album a very soundtrack like feel. On another of the softer songs ‘The Pearl And The Parthenon’ soft jazzy keys dance around a sultry cello part again supporting some beautiful vocal harmonies. The prominence of these instruments certainly doesn’t take away from the heaviness of the guitars though as that same song eventually erupts into a crushing, sludgey finale. ‘Sixty-foot Waves’ effortlessly slides around a crunchy stoner rock groove, melancholic cello lines and buoyant keyboard runs before descending into double bass driven sludge. Throughout all of the impressive instrumental fluctuations the real magic of Minoans lies in the vocal deliveries. The heartfelt and soaring vocals are simply excellent. Every line is sang with a gravity and conviction that brings the cataclysmic subject matter to life.

One of the key factors that really helps Minoans is the overall production on the album. Each instrument sits perfectly in balance to with the others with nothing dominating too much but nothing lacking. Tonally the album is really unique as well. Rather than utilize a wall of distortion to give a false sense of size the guitar tone is more of grinding thud giving room to the cello and keyboards to fill out the rest of the head space and they fill it out to marvelous effect. The straight forward but powerful drumming holds it all together and keeps the layered and complex music from becoming too cluttered. The mix is very well done and instruments often subtly fade into the forefront only to give way to another carefully pulling your ears and attention to the with them. This attention to detail and interaction between the players is what ultimately makes this album an absolute joy to listen to.

I hesitate to say that Giant Squid have created their masterpiece because I think (hope) we’ll get many more fantastic albums from this band. What they have delivered is their best, most majestic and beautiful album to date. It’s complex without being overwrought, dramatic without being corny and intelligent without being pompous. I think people who really sit down and spend time with this album will find it increasingly rewarding over many, many, many listens. If you happen get curious about a series of tragic events in human history that inspired the album that’s an added bonus to this already fulfilling and stunning piece of work.