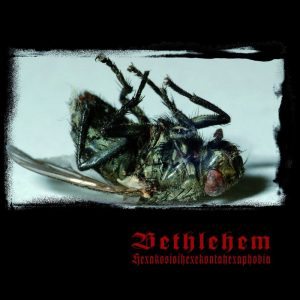 Released on October 10, 2014 via Prophecy Productions

Like so many bands who have softened their sound over the years, Bethlehem have faced inevitable backlash with each new release for abandoning the insanity-ridden depressive black metal that made them famous on their first three albums. While it’s true that Dark Metal, Dictius Te Necare and S.U.I.Z.I.D. were pinnacles of the genre, Bethlehem had really taken the sound as far as it could go and it would have been foolish to persist with it (although it should be noted that Silencer managed to at least match the insanity with Death – Pierce Me three years later).

However, while some bands such as Radiohead and Anathema arguably changed their sound for the better, many of the criticisms levelled at In Flames, for example, have genuine credence behind them – not because of the genre change but simply because the of the declining quality of their material. Going into Hexakosioihexekontahexaphobia, an album title that is just asking to be copy/pasted into reviews and articles the world over, I had no idea what to expect from Bethlehem; I had never ventured further than their 1998 release as, quite simply, the thought of the band going all Neue Deutsche Härte didn’t sound that appealing.

However, much to my surprise, Hexalongalbumtitle is actually pretty fucking good. Opener ‘Kettenwolf greint 13-11-18’ is as catchy as gothic metal gets, but it’s pretty clear from the start that the guitars are going to be far and away the best thing about this release. Despite boasting a memorable chorus and a pretty decent vocal performance, the guitar tone outshines both – the doomy, melancholic leads are certainly not atypical for the gothic metal genre but they are done so well that it’s hard not to appreciate them.

‘Egon Erwin’s Mongo Mumu’ (some great fucking song titles on this thing, by the way) has a post-punk edge that reminded me of some of the calmer moments in Lifelover’s discography, while ‘Verbracht in Plastiknacht’ sees the introduction of harsh vocals to the mix. While they’re a far cry from the unhinged madness of the Rainer Landfermann era, Guido’s got skills of his own as witnessed in the novelty throwback track, ‘Spontaner Freitod’. ‘Freitod’ is about as close as you’re going to get to a depressive black metal Bethlehem in 2014 and if you don’t get shivers from the opening shriek then you probably were never a fan to begin with. It’s a nice change of pace and it also doesn’t feel like it was just awkwardly thrown in to appease the critics.

Other highlights include the brilliantly-titled ‘Nazi Zombies mit Tourette-Syndrom’, the darkwave influenced ‘Ich aß gern’ Federn’ and the surprisingly enjoyable instrumental ‘Höchst alberner Wichs’. While the second half of the album manages to compete with the first, Hexacopypasteaphobia, like its title, suffers from being too long; while there is an impressive consistency throughout the songs, the overall experience would have been much more enjoyable had they simply chosen to cut a few of them.

With that said, the general reception appears to be that this is the band’s best work in years and while I am unable to comment on that front, I can say that it definitely exceeded my expectations. HexafuckitI’mdone is a worthwhile excursion for any Bethlehem fan, new or old.