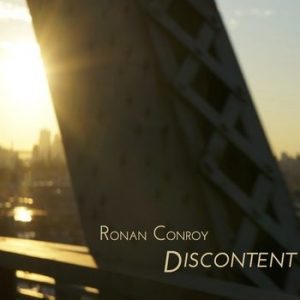 Ronan Conroy is based in New York. His previous work was with Dark folk band ‘The Listeners’ and Goth Inspired ‘Oh Halo’.

Discontent is his first solo offering and is part of a project that will spawn several albums. I suspect that each of the albums will follow a theme, certainly ‘Discontent’ has the feel of a concept album. The first thing that strikes you about ‘Discontent’ is Conroy’s voice. It is deep, dark and brooding, like molasses on a hot skillet it spreads, slowly, bubbles of discontent rising, popping and rising again.

The album open brightly with ‘Welcome to my Country’, the intro of which is reminiscent of a ‘Band’ era Bob Dylan or a Creedence Clearwater Revival song. The brightness of the music disguises the underlying message which speaks of drunken ill mannered youth, a lack of respect and financial exploitation. ‘Sunrise’ continues the bright theme with upbeat finger style guitar and lyrics that speak of love and yet you feel the discontent rising as Conroy sings “I’m not tired of loving you YET”.

‘If only’ brings percussion and a female backing vocal into the mix and starts out with some great lines including “I don’t know whats wrong with what we are saying, except for what we are saying” handing out the clear message that everything is wrong. ‘Of turning corners’ develops this theme as Conroy sings of “turning my back at you, things that I thought AT you, behind a smile’. This track splits the album into parts with its winter and a latter summer versions.

After the ‘Winter’ version things turn really dark with ‘Lord help me I am lost’ which leads into ‘Song to the River’. Conroy’s voice reaches its deepest, keyboards tap out a funeral march and the addition of strings adds to the sense of melancholic desperation. It gives the feeling of someone who has lost all hope to the wind and the deep dark river. ‘Winter of our Discontent’ is a stark and sparse instrumental piece that gives just a hint of approaching spring. ‘The Climb’ has suggestions of an outsider ‘Standing on the ledge, knocking on the window pane’. It is agonising and disturbing.

The summer version of ‘Turning Corners’ has the same lyrics as the winter version but it feels different. It feels like someone who has made the decision to break free of the things and people who are dragging them down. The gently climbing tone of the guitar, a brighter string arrangement and an altogether more optimistic percussion arrangement tells the story of someone who has reached rock bottom and has started to make their way back to the light. This feeling continues in ‘By the time I get to Denver’ a song that suggests that the worm has turned, that control has shifted.

‘So long Mary-Jane’ suggests someone who has broken free, broken the shackles that have held them down, broken the link with what or who was causing the pain. The closing track “the Road Not Travelled’ talks of a man who has made difficult choices but is content to have broken with the past.

As a piece this album holds together really well. It is deep, dark, introspective and at times menacing. It does however hint at optimism for what is to come. For Conroy I suspect that this will emerge in the next album, part of an ongoing project. To be fair this is not an album that you will be playing at our New Year house party. Like the best of Leonard Cohen’s work you will want to listen to this when you are in reflective mood and want to be challenged by what you are listening to. I loved it and cannot wait for the next instalment.