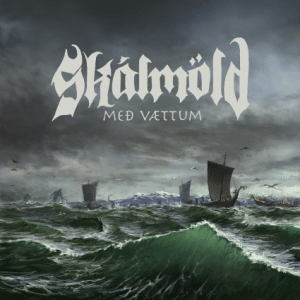 Released on November 14, 2014 via Napalm Records

They might be a little less prevalent now than they were during the grand invasion led by Amon Amarth and Turisas a few years ago, but Vikings are still as much a staple of metal as rebellion and Satan. For some reason a lot of bands seem to relate to a culture that journeyed to distant shores and caused mayhem before moving on to the next city, leaving devastation and discarded ale horns in their wake. Skálmöld may be one of the lesser known bands in this subgenre, but both their Icelandic blood and this album proves them more than worthy of its legacy.

Though Skálmöld take most of their musical inspiration from Scandinavian melodic death metal they avoid standard song structures and opt for something a little more progressive. Rather than verses and choruses, Með Vættum‘s songs are built from multiple phases, which are often radically different from each other. This surprisingly complex approach has resulted in an album that is less immediate and more subtle than you might expect, but Skálmöld have the savvy to write songs that generously repay the investment they demand – only a few of their more mid-paced sections outlast their welcome. Living closer to America than the average Vikings has also rubbed off on the band, as the guitars of ‘Með drekum’ and ‘Með fuglum’ fit some pretty obvious Metallica-isms beside folk melodies and pipes.

Gruff barks and shrieks make up the majority of Með Vættum‘s vocals, supported by some impressively used cleans. Chanting and layers of vocals are used to create the kind of hearty pagan choir sound that would suit an Ensiferum album. Used throughout as thick melodic texture, it makes a triumphant backing to the galloping midsection on ‘Að vetri’. The conclusion to final song ‘Með gridungum’ brings all of Skálmöld’s vocal approaches together in a slow-marching climax. Seeming like an exultant celebration of victory, it never loses its power despite being drawn out for more than two minutes and is the perfect end to an extremely successful sortie for Skálmöld. The Icelandic lyrics might prove a problem if folk metal’s storytelling is a big part of its appeal for you, but if you can get past the language barrier this is a great addition to any armchair Viking’s war chest.