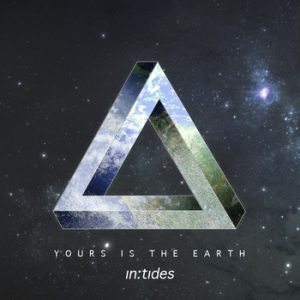 In my personal geographic perception Glasgow is the Scottish capital of music. Franz Ferdinand, The Fratellis, Mogwai are all in an endless list of what is really great and born in the city. in:tides seem to be ambitious to join this queue. Neil, Ross, Iain and Daryl started on their way with debut EP Yours is the Earth.

The general mood of in:tides’ music is kind and positive. Where some post-rock bands place more emphasis on a raw, aggressive guitar sound and some use synths to make the music more melodic and full of drama, in:tides seem to strike a good balance of the two – aggression and tunefulness together. Not too sweet that it gets sickly.

From the first track ‘A Moment of Clarity’ they start out a 20-minute consistent musical flow, in which it is hard to distinguish where one melody ended up and another started. Despite the sci-fi cover, it is a very earthy release. I would even put Earth as a concept of it. It is much more about nature around than the cosmic abyss. And title track ‘Yours is Earth’ is a glorious hymn of Earthlings.

The first emotion is always the wisest and mine, for this quartet would be described as ‘proper’. in:tides are completely in the stream of post-genre and are a good example of it. They have a clear sound, captivating guitar solos and precise rhythm. Is it an intentional escape from over-instrumentation or not…? This simplicity is beautiful. They’re not yet trying to come out of the imaginary frontiers – vice versa they are creating themselves with zeal. The EP leaves you with optimistic thoughts about the future of in:tides and curious what will happen next, with a full release maybe. Strongly recommended for those who have just joined the post-rock amateur club to get the good taste for the genre. More skilled listeners would also obviously also appreciate its sound.