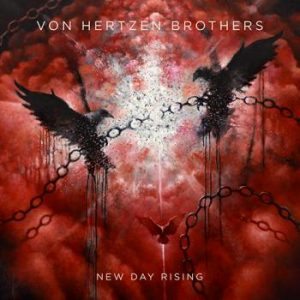 Released on March 20, 2015 via Spinefarm Records

I first heard of the Von Hertzen Brothers back in 2011, but I’d kinda lost track of them a bit, but always liked what I had heard. So when the chance to review their latest album presented itself, I leap on it like it was a gift card for unlimited doughnuts. And just like doughnuts, this album is deliciously tasty. Melding the melody and harmonies of the Beach Boys with a tinge of prog, a dash of rock and a smidgen of folk, New Day Rising is an enchanting.

Opening track ‘New Day Rising’ bounces with a guitar riff that is so infectious, it needs to come with a vaccine. Vocally, it lays out the template for the album: hooks, hooks and more hooks. It’s simply breathtaking. And it doesn’t end there either, ‘Trouble’ takes the pace down a couple of notches, but there is an almost ominous crawl to the song, driven by a drum pattern until the glorious release of the chorus. It sneaks in, grabs your heart and runs away with it, leaving you breathless and unsure if you’ll survive.

Standout album track has to be the sublime ‘Black Rain’. A plaintive song about regret, loss and sorrow: “This road to hell was paved by me”. It’s a soul-baring tune both lyrically and musically, a journey into the dark places of the heart. Elsewhere, the mood lightens considerably on ‘Dreams’ with its crowd-baiting WOAH-OH-OH-OHHHHHH sing-a-long and lyrics such as “I’d like to see you naked before I get old” it’s impossible to wipe the smile off your face, shades of Queen at their most whimsical (lyrically and musically) on this track. ‘You Don’t Know My Name’ is VHB gone punk, it’s frenetic and a welcome addition to the cannon of VHB styles, extra points awarded  for a Hammond solo/riff that Jon Lord would have been proud of. ‘Hibernating Heart’ soothes and gently ebbs the album to a close, a sparse and lilting song that utilises the higher register vocally, to outstanding effect.

6 albums into their career, VHB have truly recognised what makes them so unique: stunning vocals, engaging lyrics and sterling musicianship. There are times on this album that it’s hard to believe that these guys aren’t the biggest band in the world right now, such is their ability to write a melody. I hesitate to use the word “prog” for VHB. There are tinges there. But what this band is, is a band that writes amazing songs. No matter what “genre” they fall in, you can always rest assured the benchmark is set pretty high on a VHB album. There is a maturity yet playfulness about a lot of this album. You will not be disappointed.