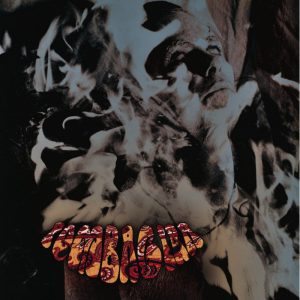 What is there to expect from a double album that explores the previous record’s theme? English doom duo Pombagira‘s latest release offers precisely that insight.

For almost a decade the band has been crafting monumental pieces of heavily distorted doom. The last release Maleficia Lamiah marked a departure from their trademark sound, incorporating experimental elements and field recordings into Pombagira’s music. Flesh Throne Press not only follows in its predecessor’s footsteps, but is indeed an expansion of it. Eighty minutes of new material over two discs indicate that Pombagira were nowhere near done exploring a more varied and psychedelic direction. The question is whether such an elaborate sequel to a full-length record is necessary or worthwhile.

How does Flesh Throne Press compare to Maleficia Lamiah then? To quote the press release: “Coursing with the undulations of textural juxtaposition[…]”, “Embodying both aspects of ingress and egress, this new album will present a more psych-o-delic side”. As intriguing as it is confusing.

In terms of sound quality, Flesh Throne Press exceeds even the highest expectations. Recorded over a period of two weeks and tracking an ambitious SIX cabs and amps per guitar take, the result is simply stunning. Sounding simultaneously intimate and sprawling, it evokes the feel of front-row seats in an echo chamber. Each listen reveals yet more minute discoveries, from fingers changing chords to breaths between verses; every detail draws the listener further into the recording rather than distract from the songs. The characteristic drone and buzz that has defined Pombagira since their early releases is still present, but the songwriting has evolved into a multi-faceted, complex offering.

Stripped-down compositions of fragile melodies and meditative chants segue seamlessly into abrasive bellows buried beneath layers of distortion and reverb. While the juxtaposition of vocals and instruments on Maleficia Lamiah often created a dissonant unease, Flesh Throne Press intertwines chanting and shouts, clean guitar and heavy drone more harmoniously. The restrained, yet never derivative drums plus occasional guiro percussion complement the melodies perfectly. Vocalist Pete delves deeper into lyrics of flesh, spirit and mysticism, which is reflected in the album title’s reference to dirt weighing down interred bodies.

If Pombagira’s latest album was to be summarised in one word, it would undoubtedly be ‘TONE‘. All caps, italics, bolded – no amount of tools in a writer’s arsenal could do the sound of Flesh Throne Press‘ justice. There are infinite details to be discovered by the keen ear.

All told, the band delivers a worthy extension of Maleficia Lamiah. Unfortunately, the generous running time diminishes the listening experience somewhat. While each song is masterfully written, played and recorded, the album veers towards overkill. Of the thirteen tracks that clock in at just under an hour and a half, the long stretches of instrumentals and interludes fade into background noise. Individually they deserve more attention, but combined so many variations on a musical theme are overwhelming. Regardless, Pombagira have created a cohesive, yet varied, soundscape that benefits from breath-taking sound engineering. And if this record’s sole weakness is its exhaustive running time, that may only highlight the absence of serious flaws.