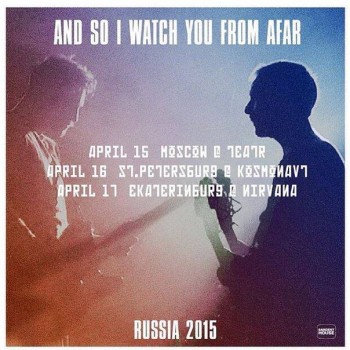 The promo tour for Heirs, the new a;bum by And So I Watch You From Afar, headed to Russia in April 2015. The band’s last tour was a massive math invasion to 15 cities of Belarus, Russia, Ukraine. So now 3 years after these great times the band came back to play in Moscow, Saint-Petersburg and Yekaterinburg. All shows were locally supported by 6 bands. Moscow has seen two of these: Weary Eyes and Pobeda.

The show started with Weary Eyes, a post-metal Moscow quartet, formed in 2011, on ruins of many bands according to their official bio. The band bass player Nikita says that ASIWYFA is nearly the only one common favorite band for all Weary Eyes members. Still, they are doing their own way combining reflexive melodic fragments with smashing walls of sound. That evening Weary Eyes played powerful side of their recent EP and a couple of new tracks. Surprisingly ASIWYFA’s Niall Kennedy was noticed on the floor watching Weary Eyes live.

Another local supporter Pobeda was a dark horse for me. ‘A band that is not strictly instrumental anymore’ they said. Only one available track in the whole internet. A little net-scrolling revealed that a former post-rock band is now playing with a vocalist from Venezuela. The sound of Pobeda has much more notes of late 90’s post-hardcore (Fugazi, ADTI) with a slight mathematic trace.

ASIWYFA decided not to tease the happy and passionate crowd and came on stage exactly the expected 9 p.m. and started right from the new material from Heirs. ‘Wasps’ and ‘Run Home’ immediately got the crew stage diving and dancing. Next the band played absolutely new ‘These Secret Kings I Know’. Opposite to previous bands experiments with vocalizing which have some ethnic accent this one sounds closer to early band times with strict mathematic rhythm. Add this to brilliant live playing and massive energy blast that the band put into the show. No need to add how well this trick worked.

This prologue was like one deep breath. The next epic part came with the Gangs album themes (Beautifuluniverse.., Gang). The wave of energy was getting higher and the peak point turned to be at ‘7 Billion People All Alive At Once’. In fact it was played by 7 artists. At vocal time ASIWYFA musicians suddenly took a step back from microphones. The same second Weary Eyes members rushed out to stage to sing along. That was the moment when nobody on the floor could keep silence for. Personally I felt like I just got to know pure sense of the word ‘musicianship’.

The main set ended with other portion of new tracks was played (‘Heirs’,’ Tryer’). The last melodies of the show sounded cosmic with long-lasting complicated and repetitive riffs. That impression is not typical for the band. It makes you guess why the cover art of Heirs has a cosmonaut.

This impression stayed on encore tracks. Was a real pleasure to hear a couple of themes from previous album (‘Euonia’, ‘Big Things Do Remarkable’), as it wasn’t promoted in Russia previously. These themes sounded soulful and touching with special ethnic notes. A final dot was rough and heavy ‘Set Guitars to Kill’. That was the best finish to the show that revealed the main idea of the band: with the minimum of electronics (board and loop) they captivate with smart heavy sounds.

Joy is the main feeling you have from the records of ASIWYFA and it comes ten times more when you see it live, they leave it on some upper-earthy level.