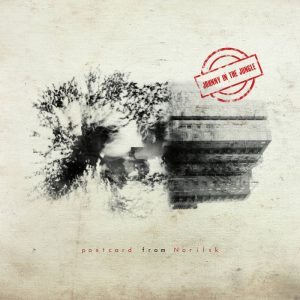 I can’t call it a cliché but when it comes to the question “What do you know about Russia?, pretty identical facts are mentioned. In most cases I doubt that it would include Norilsk. I will give a little spoiler that this is a closed, highly urbanized area in the polar day/night zone and let you Google the other facts on it if you feel interested. Somehow this city became the inspiration for 3-piece instrumental Hungarian band Johnny in The Jungle. The concept EP Postcard from Norilsk came out in May, 2015, telling “the tale of a young guy moving there leaving family and friends behind to make ends meet and also in search of a different lifestyle”.

The band comes from the Hungarian city Szeged. With two self-released albums the trio is not new to the industry. They’re a classic trio of guitar, bass and drums, combining jungle beat and post-rock complexity in the sound. Still, the EP is peculiar in both a musical and an emotional way. The tale starts from the melancholic ‘We Are Trapped’, a properly played post-rock theme with dominating guitar solo. A fast-speaking and emotionless narrative voice gives the growing impression of exhaustion, hopelessness and willing to escape.

Nickel Rush, the central part of the EP, is a very GYBE theme. It comes out with a complexity of rhythm and some oriental guitar motives. This track is rather monotonous and gives some stagnating impression. You can hardly differentiate when it rushes up into the next melody.

‘Thawing and Flood’ is a dynamic peak of the story – fast and the least emotionally coloured. It is some kind of antidote to the first – the same riffs and background actually make a completely different impression. ‘Thawing and Flood’ gives some heat and vibe with its jungle rhythm. It is devoted to a spring which does not bring joy, but filth and flood. Towards the end the degree of suspense gets higher and darker. “The levee breaks” leaving you in obscurity. Is it the end or has anyone managed to survive? The question is open.

Postcard from Norilsk is only 20 minutes long in total. Despite this, it absorbs you into an urban apocalyptic world by the stage of its final breakdown. After you become normal again you already know how dystopia might sound.