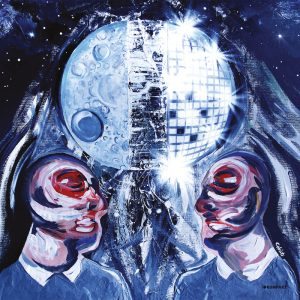 It’s been a long time since I first heard The Orb, my introduction being the still brilliant ‘Assassin’ single. Those early days and first two albums are rightful classics but probably a bit of a burden. I couldn’t help myself, when listening to Moonbuilding for the first time, comparing it to those classic releases. The truth is after U.F.Orb I was mostly disappointed with each new Orb album to the point of not keeping track any more. Still, when this album was announced I felt a wave of excitement and hopes rising that I might feel the same way for it as those early albums.

In reality Moonbuilding isn’t going to be as influential or praised as highly, but it is a damn good album. Like a lot of artists who have been around for a long time and had huge success early on, the problem is with expectations being sky high. However, Alex Paterson has never come across as someone who gives two fucks what people expect of The Orb. That and the various shifts in personnel and styles is maybe the secret of The Orb’s longevity.

As it is Moonbuilding 2703AD has both feet firmly in the present/future but with a fleeting glance to the past also. Split across four long tracks the album benefits from various shifts in style and tempo. “God Does Not Exist” the opening sample tells us, before ‘God’s Mirrorball’ unfolds. An infectious dub tinged techno track it eventually builds in tempo and intensity to the point of becoming a dance floor stomper. The involvement again of Thomas Fehlmann gives the album plenty of Techno and House influences as well as leanings into dub and ambient. It’s similar at times to their previous release on Kompakt records Okie Dokie, It’s The Orb….

Throughout the album there are moments or sounds that recall the earlier albums. However, these are brief and nothing gets bogged down in nostalgia. Moonscrapes 2703 AD continues on from the opener in similar style. ‘Lunar Caves’ begins with familiar sounding pulses and is more ambient than the previous tracks. The title track closes the album with hip hop beats and funk influences. The album feels slightly disjointed with the faster paced opening half being followed by the more downtempo final two tracks but that’s just a personal view and as someone who listens to albums start to finish mostly.

The latest album from The Orb is highly enjoyable and proof that in 2015 they are still very relevant.