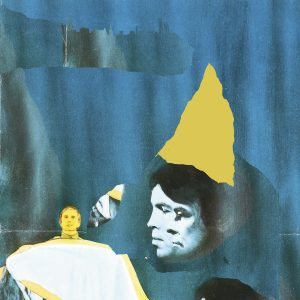 After Oceansize imploded back in 2010 shortly after the release of their fourth and final album, guitarist/singer Mike Vennart joined Biffy Clyro as a live member and a new band called British Theatre alongside former bandmate Richard Ingram. Whilst on tour Mike started to record bits and pieces of what eventually would turn into his first solo album, entitled The Demon Joke. Let’s see Mike’s first solo effort can holds his own.

With former band members Steven Durose and Richard “Gambler” Ingram contributing to this album as well it doesn’t came as a surprise that The Demon Joke isn’t a far cry from seminal Oceansize records like Everyone Into Position, Frames and Music For A Nurse. Tracks like ‘Doubt’, ‘Rebirthmark’ and ‘Don’t Forget The Joker’ are just as rich in texture and musically diverse as ‘The Charm Offensive’, ‘Meredith’ or any other Oceansize staple.

Mike Vennart has grown as a vocalist as well, displaying a stunning variety of different singing styles, most notably on ‘Doubt’ and ‘Operate’. The latter has a vocal hook which wouldn’t have been out of place on the last Biffy Clyro double album.

Talking about Biffy Clyro, the band seems to be something of an source of inspiration on The Demon Joke’s more poppier moments, like ‘A Weight In The Hollow’ and ‘Amends’ and in the overall songwriting approach as well. Whilst many Oceansize songs tend to be drawn out and lengthy musical affairs, the vast majority on Mike Vennart’s solo effort hardly surpass the five minute mark, making the album surprisingly radio-friendly. It’s the combination of cohesive songwriting and Vennart’s trademark touch for experimentalism and reaching out what makes The Demon Joke such a rich and enticing listening experience.

Sometimes more subdued whilst other letting it all out during other moments The Demon Joke shows Mike Vennart at the pinnacle of his creativity. Perhaps an Oceansize album in all but name, The Demon Joke would have been the perfect follow-up album for Frames and Home & Minor. Brilliant album and a prime candidate for any year list.