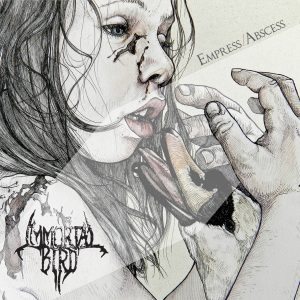 Immortal Bird started as a three-piece. Rae Amitay played drums and handled vocal duties on their 2013 EP Akrasia, with Evan Berry playing guitar and John Picillo on bass. Amitay gave up the drums for their just released full-length debut, Empress/Abscess, giving Garry Naples permission to sit behind the kit. Amitay’s voice shreds, as does the rest of the music, especially for a male-backed metal band.

Akrasia was stunning, but the band has taken a huge step forward with Empress/Abscess. The song writing is more polished and their sound is bigger. Immortal Bird melds death metal with black and grind elements in a seamless fashion. Amitay and Berry wrote some of the nastiest riffs you can hope to hear. Naples had been playing drums live for the band for the previous year or so; he recorded drums for the album. Picillo’s thunderous bass tone backs it all up. There’s not a single miss on this 5-song, 31-minute record.

Immortal Bird write really good songs. ‘Neoplastic’ opens the album with a dissonant pounding that rolls into a straight ahead grind beat. Amitay’s blood-curdling scream stands out immediately. John Hoffman from Weekend Nachos shows up to add some backing vocals. ‘Saprophyte’ starts out with a slower tempo and repetitive guitar lead, but moves into black metal territory about halfway through. ‘Sycophant’ will get your head moving and your feet two-stepping. The song provides a different tone that fits perfectly in the middle of the album. ‘To a Watery Grave’ keeps it interesting, as Amitay plays a glockenspiel over an abrupt piano break at the 3:48 mark.

‘And Send Fire’ finishes the record and is probably the best song here. It clocks in at over 10-minutes long and takes you down a path of destruction. Opening with a creepy buzz, the track moves through each of the elements that Immortal Bird blends. It’s calm and chaotic and ends with ambient noise that is the sound of a recorded fire, played backwards. That last touch was the stamp of approval from Colin Marston of Krallice/Behold the Arctopus/Gorguts, who mixed and mastered the record.

Immortal Bird’s Empress/Abscess is going to end up as one of the best releases of 2015. It pushes the band to the forefront of a scene that can too easily get stale. The band has created a sound that is unique and gripping. The album is out digitally on Bandcamp and on vinyl through Broken Limb Recordings.