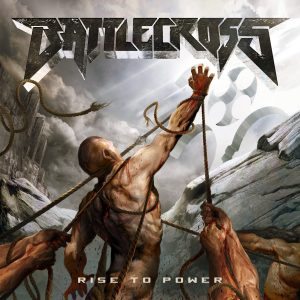 Battlecross‘ “blue collar thrash” describes their work ethic as much as their music; Rise to Power is the Michigan outfit’s fourth release since the turn of the decade (including their self-released initial debut) during years which have seen the band play basically everywhere they could and with everyone they could, from Hatebreed to Hate Eternal to Metallica’s short-lived Orion Music + More festival. It’s clearly helped grease the wheels with each record being tighter and catchier than the last, and while Rise to Power might not be another vastly noticeable leap from 2013’s excellent War of Will they certainly haven’t dropped the ball.

Battlecross take on thrash metal is distinctly modern, clearly a product of a post-NWOAHM landscape with crystal clear 21st century production, melodeath seeping into every progression, and typical wild-eyed thrash shouts sidelined in favour of harsh bestial roars. However instead of what you might expect from a thrash band taking plenty of their cues from extreme metal, Battlecross frequently end up more in line with the upbeat Annihilator side of things instead of the generally preferred depravity of Kreator, the closest to which they get being sixth track ‘Blood & Lies’, which actually makes Battlecross more of an interesting proposition that they may initially seem.

Funnily enough this band really shines as much in the more multi-faceted emotions of their melodies as in the pure aggression of their assault. Tracks like ‘Absence’ and ‘Despised’ have traces of In Flames, Arch Enemy and latter day Carcass all over them as much as they do Slayer or Exodus, and opener ‘Scars’ and fourth track ‘Spoiled’ bring that NWOBHM edge forward not just in the melodies but in the more straight-forward punch of the riffs anchoring the songs too. Meanwhile the endlessly driving ‘Not Your Slave’ and ‘Bound By Fear’ focus on that more familiar pulsing crunch made especially potent by Jason Suecof’s production allowing everything from the bass upwards to shine. Vocalist Kyle “Gumby” Gunther remains a strong presence throughout, his high screams almost reminiscent of a less necro Trevor Strnad of The Black Dahlia Murder fame and his ferocious mid-ranged bellow distinctively all his own.

To Battlecross’ credit too they don’t overstay their welcome, the snappy thirty-five minute duration far more suited than a fifty minute venture, which would probably have begun to sap their potency as while they undoubtedly hit the spot, Rise to Power isn’t exactly world-bending. Ultimately it perhaps wouldn’t be too unfounded to call Battlecross’ fourth record inessential, largely retreading ground already covered, but their songwriting and riffing chops elevate Rise to Power above that mediocrity. In a metal landscape where we have plenty of bands pushing boundaries or bringing listeners along on those enveloping emotional journeys, it’s reassuring that bands like Battlecross continue to thrive and provide that dependable ferocious crunch.