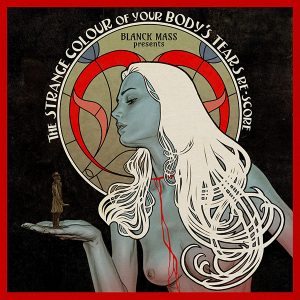 The Strange Colour of Your Body’s Tears is a film directed by Hélène Cattet and Bruno Forzani, that usually divides opinion. Essentially a homage to 70’s Giallo films, it focuses primarily on visual rather than narrative impact. It’s a stunning work that if you view with an open mind can be regarded as a cult classic.

After hearing about it, as it gained much attention at Film Festivals such as Glasgow Frightfest, I finally got to see it last year. Initially I found it perplexing and very disorientating, but warmed to it after a few viewings. Given it’s slack narrative I was surprised to hear Ben Power (Blanck Mass, and also of Fuck Buttons) had been tasked with curating a re-score for the East End Film Festival. Power is someone who uses narrative strongly in his music and has often spoken of its importance to him.

The film’s original soundtrack featured no new or commissioned music, so in that sense its a good fit for a re-scoring. What Power has done is enlist some leading electronic/sound design artists to each contribute tracks for different scenes and portions of the film. It’s a unique way of approaching a score of this type and one that has produced engaging and surprisingly coherent results. Artists including Helm, Konx Om Pax, Moon Gangs and Power himself as Blanck Mass worked and submitted tracks independently without knowing or hearing each others input. It’s a great tribute that the entire soundtrack works so well and feels very much like a cohesive work.

If you know the work of those involved Helm etc the sound will not surprise, tense passages of ambience and brooding innotive electronica. The album also brought some artists to my attention for the first time such as the excellent contributions from ‘C Spencer Yeh’ and Swedish group ‘Roll The Dice’. The latter contribute the opening and probably most accessible track ‘Portal’ and led me to their excellent album ‘Until Silence’ which was released last year.

The music fits with the dream-like disorientating scenes of the film, creating an unsettling and tense feeling. I watched the film again recently after this release was announced, and hope to watch again soon with this playing in a Dark side of the moon/Wizard of Oz style sync up. Seriously though, as the sparse dialogue is subtitled this could provide an excellent visual backdrop for the music here. There has already been one screening for the East End Film Festival in London, although it is unconfirmed if this will be repeated anywhere.

Ben Power has already released one of my favourite releases this year as Blanck Mass, the amazing Dumb Flesh album. Now he is responsible for a second with this collection along with all involved. A limted vinyl release will be available through Deathwaltz Recording’s Originals inprint and also on digital platforms from July 17th.