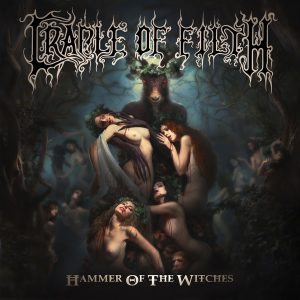 Calling the eleventh album from UK gothic extreme metal icons Cradle of Filth a return to form would be a disservice to the records which preceded it. An unfortunate amount of people seem to think they’ve been making 2006’s undeniably more commercial and arguably patchy Thornography over and over again since, which simply isn’t true, as Cradle’s last three studio outings showcase a band firing on all cylinders and doing their utmost to keep on defiling the world around them with some great tunes to boot. Instead what Hammer of the Witches represents is more than that, a return to a higher plateau altogether inhabited by their finest moments.

Longtime fans could be forgiven for worrying after the departure of guitarist Paul Allender last year, but this line-up shift seems to have had far more pros than cons. New axemen Richard Shaw and Marek “Ashok” Šmerda seem to really understand what made Cradle’s indisputable classics like Dusk… and Her Embrace or Cruelty and the Beast so timeless, and indeed this rediscovery of the Iron Maiden-revering twin guitar dynamic is one of this album’s greatest strengths. The punk edge is reined in slightly, nothing as deliberately riotous as previous album Manticore‘s lead single ‘For Your Vulgar Delectation’ here, but instead the melodies which have been Cradle’s strongest asset since the beginning are pushed right to the forefront.

For starters, for a run of especially brilliant songs flowing one into the other, the first four proper songs onHammer of the Witches are a hard one to beat this year. After mandatory gloomy intro track ‘Walpurgis Eve’ (which is actually far better at its job than some disposable previous examples), thunderous opener ‘Yours Immortally…’ is frankly a little jaw-dropping, proudly displaying all of those archetypal Cradle-isms from the spiralling gothic keys to Dani Filth’s forever gloriously disconcerting shriek, but with renewed vigour and fire imbuing it with the kind of vitality that so many bands a quarter of their age lack. ‘Enshrined In Crematoria’ is all irresistible guitar lines, ‘Deflowering the Maidenhead, Displeasuring the Goddess’ is as delightfully wicked as the title suggests with rampant tremolos, and ‘Blackest Magick In Practice’ slows things down a tad in order to extract every last ounce of melancholia from its emotive leads.

The second half is no slouch either, whether it be the unstoppable approach of ‘Onward Christian Soldiers’ or forbidding menace of lead single ‘Right Wing of the Garden Triptych’, which despite a very brief but bizarre electronic intro which might stir up some unpleasant flashbacks for fans familiar with previous admittedly low key experiments with trance and remixes proves to be yet another highlight, complete with one of those earworm clean hooks which Cradle have used where necessary, but not become dependent on as a crutch, a long way off from a predictable beauty and beast harsh/clean dichotomy.

Hammer of the Witches never once dips into filler territory, which while boasting a typical latter day Cradle runtime of nearly an hour is impressive going, forming one of their most cohesive and consistently engaging albums to date and a more than solid base for Dani to weave his typical gothic poetry over with tales of vampires, witchcraft and very human barbarity. The album melds the nocturnal, but colourful Cradle of old with the more direct and muscular recent works, feeling almost like both a culmination of the past decade for the band and the dawn of another new and exciting period.

That this is Cradle of Filth’s best album since Midian fifteen years ago landing firmly within the top half of their pretty hefty discography makes Hammer of the Witches undoubtedly worthy of notice. It’s suiting that the lyrics of ‘Right Wing of the Garden Triptych’ directly reference 90s Cradle master-stroke ‘Queen of Winter, Throned’ because this is the most quintessentially Cradle-like they have sounded in years, having great potential to not only enslave a whole new horde of devotees, but to once again win over fans of old who may have become disenchanted if they actually give it a fair shot. No, this album isn’t Dusk… and Her Embrace, but incredibly from a band over two decades into the game and with more than their fair share of opposition, it’s not that far off.