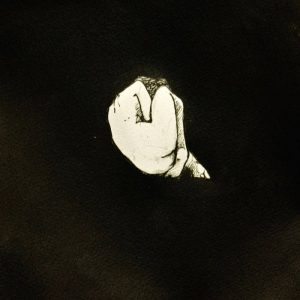 Glasir has been making notable waves in the post-rock scene, despite having only been around for less than two years with three releases, all clocking in at under 25 minutes. This trio from Dallas, Texas deserves the attention, with their dark and brooding twist on post-rock.

There is literally nothing about this EP that I don’t like. The production is fantastic, I can hear all parts at all times regardless of volume. The effects chosen for both the guitar and the bass are spot on and create amazing textures throughout the entire album. The flow from one song to the next without making them all sound the same is a nice break from the normal stereotype of newer post-rock bands.

Even though the album itself is just under 23 minutes long, it doesn’t feel too short. All three of the tracks are divided evenly, and none of the tracks sound like they’re trying to out-perform any of the others, it’s a very consistent album, which makes for an excellent listening experience.

It feels like a very cohesive and polished release, the way that it feels complete and lacking in nothing. Nothing feels out of place or uncomfortable for Glasir, including the noise and doom influences towards the end of ‘Into The Void’, making for a hell of an exit. Any band that doesn’t weigh itself down by restricting itself to any one genre is a good band in my book. The post-rock passages are beautiful, the post-metal riffs are crushing, and the doom at the end is just so perfect.

That’s all I can really say about Glasir’s Unborn. Perfect.