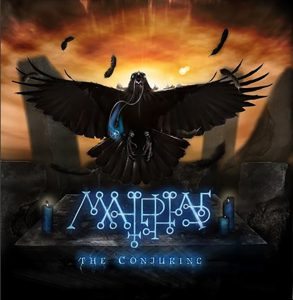 Released on February 24, 2015 via Independent

Malphas are a melodic death metal band from Philadelphia. While mainly melodic death metal in style there is a lot more going on with blackened vocals while at times the music is more symphonic and epic. The lyrics are influenced from stories about Malphas a general of hell that commands forty legions of demons.

The opening song ‘The Conjuring’ begins simply enough with the sounds of a church organ before the drums and guitars kick in, the organ then drops out as the vocal begins. The drumming throughout drives the song along as various elements come and go throughout the song with guitar riffs and solos and the organ dropping in and out, there is a lot going on and it ends up sounding cluttered and lacking in structure. The same can be said of the next song ‘Shards of Truth’ as elements drop in and out on a whim and then suddenly reappear from nowhere.

The next song ‘Legion’ is the best song of the album as it keeps thing simpler and is more structured and builds to an excellent guitar solo before the song breaks down then builds to a climax. ‘Visions of the Burning Darkness’ would be an excellent track, but is let down by the synth sweeps in the background that are not necessary. Without them the track would be heavy and bleak as the song title would suggest and better for it. ‘Heaven’s Fall’ finishes the album well with a more structured epic style.

Despite the faults of the EP, it does show the future potential of the band as there is plenty of talent, which is a good start, but with more focus and scaled back production on some of the songs this could have been excellent.