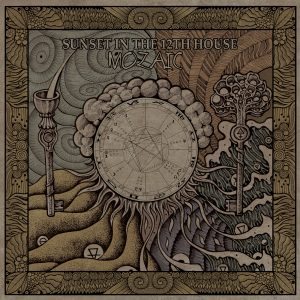 Released on June 5, 2015 via Prophecy Productions

I have been sat on this review for quite some time now, seemingly unable to make my mind up about my thoughts on this album. It’s quite progressive, maybe a little too much in places for my tastes, and this was probably throwing me. Ideas become a little too cheesy for me when they are played around with too much, but that’s my problem with prog. So, when I eventually came to consult the extensive notes I had made on this one to turn it into a cohesive piece of writing, I put the album on one final time.

Was this even the same band I had been listening to for the past few weeks? The ideas make sense. The album was recorded exceptionally well, the songs are crafted and played incredibly well, and whilst it is still a little cheesy for me in a few places, it is a much more enjoyable listen. Maybe I just needed longer time to digest what this one was all about, so I’m glad I sat on it for as long as I did.

If I were to describe this band to you in terms of influences (to my ears), I would say that you would enjoy this if you like the sound of Textures and Devin Townsend crossed with the style and structure of Red Sparowes, Russian Circles (when they let loose with their ‘metal’ sections), and even Agalloch at points. Strangely, it combines well. The press release came with some brief descriptions about the music as it normally does and mentioned an oriental influence. I personally didn’t pick up on that. Instead I hear a big European folk and traditional middle eastern music influence.

The music is a largely instrumental affair with vocals playing a largely minor role in the overall sound. When they do surface, they tend to be drenched in echo and used as an instrument for adding more ambience, except from in the last song, ‘Seven Insignia’, where the band let loose with a much simpler structure and a more ‘modern’ metal sound. The vocals here are aggressive, delivered quite well, but still a let down. This is my least favourite track on the release. The whole album is built up well and this particular song just stands out from the rest, and not in a good way. For the most part, the guitars sound phenomenal. When clean, they are cavernous and the reverb almost drips from the notes when they ring out. When they crank on the distortion it is hard not to think of Devin, a match made in heaven for my ears, and like him, the keys play a largely prominent role in creating the mood and texture in these six songs. The musicianship is incredible as they manage to recreate the subtleties of post-rock and post-metal whilst simultaneously building their songs from the traditional influences they use. It makes them stand apart in a scene that is largely built on recycled ideas.

This is a very strong debut release from Sunset in the 12th House, and I can see pretty great things coming from this band in the future once they figure out exactly what it is that they are all about. This one is definitely worth a listen.