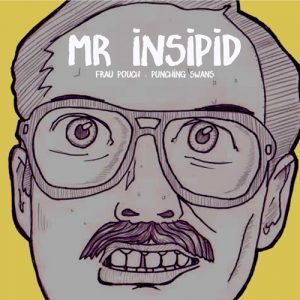 Released on September 11, 2015 via Skingasm Records

Another release from the ever-growing and reliably original Skingasm Records, this split-single from Frau Pouch and Punching Swans is yet further evidence that Medway is a uniquely fertile source of music as distinct as it is visceral. The spawn of this unholy union is predictably odd without ever being contrived; these four songs – technically three I guess as the bands each play their own version of ‘Mr Inspid’ – epitomise both band’s DIY ethos in that they appear to have been written, played and produced with little regard for anything other than the pleasure of the bands themselves. It’s a refreshingly honest approach that is strangely pervasive in the Medway towns. Frau Pouch and Punching Swans are, however, much more than just hard-working, noble purveyors of a worthy ethic; many DIY bands have an admiral ethos, but just sound awful. This isn’t a fate suffered by either.

Frau Pouch are truly unique and conjure a sound which is utterly bizarre yet immediately accessible. Their two Eps – The Apronectomy (2011) and Space Chicken (2013) – are unheralded gems that will eventually be mounted in marble sarcophagi in every city across the globe when the Gods of music descend from the heavens to impose aural enlightenment upon humanity. Unrivalled masters of the two-minute epic, on “Mr Insipid” they spew forth their trademark bass-heavy staccato weirdness and disturbingly vivid imagery. It’s about a man “so beige and so bland” who “makes his own special wine that tastes a bit like soap”; at one point it sounds like Joe is singing “genital suicide”…hopefully anyway. The brilliantly titled “Coma Beard” is “a not so subtle play on words” that ends before it begins. One minute and seventeen seconds is hardly a drum intro for most but this is curiously memorable; in fact it’s proved difficult to stop singing “Coma Beard” Elvis-like at inopportune moments.

Punching Swans have released two brilliant albums – Punching Swans (2012) and Mollusc (2014) – and have been garnering some richly deserved exposure in the last twelve months. A tight three-piece that shifts between the furiously caustic and the perceptively surreal, they are a brilliant live act that energise the most flaccid crowd. Their version of “Mr Insipid” is heavier and more raucous than Frau Pouch while second song “Bees” grooves menacingly before erupting into a throat-shredding, guitar-squealing finale.

Both bands have albums in the pipeline and on this evidence they are going to be shit-hot. You’d be hard-pressed to find two bands of such quality joining forces in this way anywhere across this green and pleasant land; listening now may spare you divine wraith in years to come…