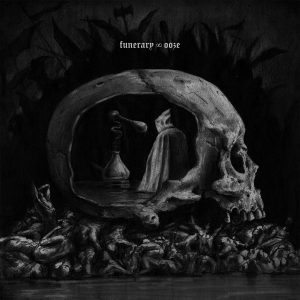 Released on August 11, 2015 via Midnite Collective

Phoenix, AZ’s Funerary delivered one of my releases of 2014 with Starless Aeon, a 32 minute granite slab of blackened doom where they didn’t skip on the atmosphere and took no prisoners when they unleashed hell. It made me reconsider what the definition of heavy music was. Suffice to say, I am looking forward to this.

‘Ascent’ is an eight minute journey that begins with reverb soaked guitars that drone and pulse with their own heart beat. When it erupts, it’s so heavy that it’s almost claustrophobic. The vocalists make use of their incredible combined range, going from guttural demon like lows to flailing banshee like highs that are straight up blood curdling. The track builds and builds, drums pound to fill out the void before building to boiling point and unleashing hell fire.

‘Descent’ begins. This one brings an Iron Monkey influence to mind. The first part of the song makes use of a riff that both Sabbath and Wino would be proud to call their own, but Funerary give it their own dusting with hate and sulphur. This gives way to a slow build up where guitar feedback and noise are used to create an cacophonous abyss that builds up to one of the most irresistible and best head banging moments that I have experienced since Dopesmoker was reissued. Excellent.

As a whole, the material isn’t quite as on point as Starless Aeon was for me, but the songs on offer here a lot more immediate and thus make a great starting point if you are just checking these guys out for the first time. I look forward to them bringing out an album to see what ideas will be on offer at that point.

The other side of the split comes courtesy of Ooze from Trieste, Italy. This is my introduction to this band. On my first listen, I picked up on an early Down influence. With further listening, I would say that this influence is still a definite factor in these songs, particularly in ‘Targeted’, and at quite a few moments during ‘Bridges Burned’. Ooze have a much more “straight up” sludge sound, and I would definitely recommend them to you highly if you were interested in Down, Iron Monkey or Eyehategod. Seriously great stuff, and I will be sure to check out more material, based on the four songs on offer here. Just over 15 minutes of pure riff worship and head banging greatness from start to finish.