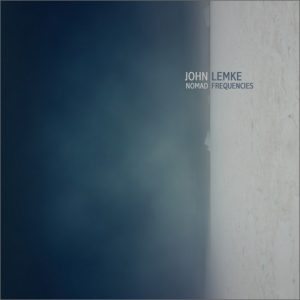 John Lemke is a Glasgow based/Berlin born composer and musician. Nomad Frequencies is his second album released on Denovali records in addition to a couple of Ep’s. I was immediately drawn to his début album ‘People Do’ by it’s spacious sound and melodic piano. John seemed someone who despite using modern electronic techniques created a warm and organic sound also.

Nomad Frequencies has come after a period of unsettled living due to his home/studio having extensive structural damage sustained in storms. It led to a lot of travelling and temporarily staying where he could. Much of the album was written during this time and the experience heavily influenced the sound. While a lot of the music isn’t that far removed from his previous output the scope is much bigger and it’s tones more varied and at times darker.

What is achieved here is a diverse range of sounds and styles that somehow is still very cohesive. The first main track “The Unwinding” has a dark and minimal approach before expanding into a more dramatic feel and sounds huge as it builds to an uplifting climax. It leads into “At The Dust Boutique” which has a sunnier feel and dub influenced rhythm. However, it is still underpinned by melodic yet sad sounding piano parts. It’s a feature of the album that makes it stand out, the recurring melodies and infectious sounds set it apart.

Elsewhere, “Vessel’ could be a deep house track with its frantic piano riff and uptempo rhythm. Another highlight is “Corroder” with it dark tone and unsettling atmospherics. It could easily be imagined as a soundtrack to some twisted thriller or horror movie, yet still it retains familiar hooks and melodic parts. “Grass Will Grow” unfolds with a skittering beat that again sees variation used and engages you immediately.

Despite the mix of sounds and styles, Nomad Frequencies very much feels like an album of a cohesive nature. It makes for a highly enjoyable listening experience from start to finish yet most tracks have enough quality and character to stand alone. Generally I’m not keen on comparing artists but there are a lot of similarities for me in the music of John Lemke and that of Nils Frahm or Ólafur Arnalds. I hope that Nomad Frequencies sees him enjoy similar success and acclaim.