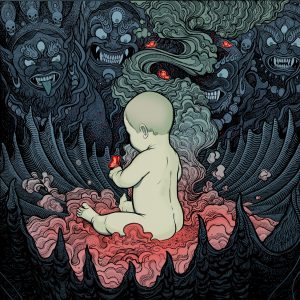 Released on October 23, 2015 via Pelagic Records

Mono coming together with The Ocean would normally be something I would get excited about, much like my excitement when I discovered the Mono and Pelican split album. Split albums in general excite me. I love the idea of two bands coming together to create something unique, especially when it’s two bands I appreciate and respect in different ways.

Mono’s side of this two-song EP is more or less what you would expect from Mono. It’s eleven minutes long, and it sounds like a For My Parents b-side. Crescendo-ing throughout almost the entire piece in a violent and beautiful manner that Mono has come to master. It comes to a climax and a lull, bridging itself to another passage of building up in a much slower and less dramatic manner than what was presented to the listener just moments beforehand. The title ‘Death in Reverse’ is quite appropriate, with its rather sombre ambience.

The Ocean’s contribution is very much like Mono’s in the sense of overall tonality or mood. It’s very minor and dark. As always, The Ocean’s instrumental side of things is brilliant, I rarely disagree with cello in my music, regardless of what genre. The Ocean’s lineup has always been in a liquid state, but I have to say how impressed I am with their latest drummer, I think he really nails it in this track. As always, the layering and build-up is magnificent. It’s very Pelagial-esque. But when then the vocals came in, and I was reminded as to why I prefer listening to The Ocean’s instrumental version of Pelagial: The vocals feel so out of place. The Ocean consistently mix the music in such a way that the vocals feel like an afterthought, and the music is their main focus. This isn’t an inherently bad thing, but it doesn’t feel natural or intuitive, unless it were something like a live recording. If The Ocean released an instrumental version, I would definitely prefer that.

Overall, this is a very good EP. Both pieces hold their own, and they compliment each other in their respective ways. I was hoping that at least one of the bands would present something new in their respective sounds, but both of them fell a little flat when it came to pushing the envelope. As separate singles, they’re both par for the course. As a split, it falls short of being remarkable.