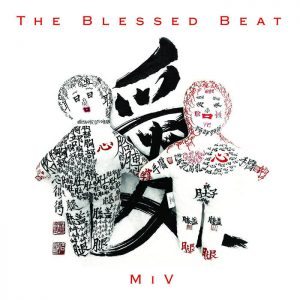 Right off the heels of KoMaRa’s release only mere months ago, Paolo Raineri and David Kollar are back with another slice of self-described “avant-rock”, this time with Simone Cavina on drums and under the band name of The Blessed Beat.

With two thirds of the lineup the same, comparisons to KoMaRa are going to be inevitable. And indeed the music is a logical extension of KoMaRa’s quieter sections, with very similar instrumentation: electronic loops and noises, Raineri’s manipulated trumpet and all sorts of noises being coaxed from Kollar’s guitar. What makes MiV instantly different is having Cavina behind the drumkit instead of Pat Mastelotto. Cavina’s drumming is more loose and lighter than Mastelotto’s, opening up the music to a different kind of experimentation.

Inspired by Bukowski’s twisted short story, “The Copulating Mermaid in Venice, California”, MiV is made up of eight improvised pieces of music, each titled after a line of dialogue between the two main characters of Bukowski’s story. The result is a series of lengthy improvised soundscapes, with emphasis on droning electronic loops and Raineri’s trumpet. Meanwhile, Kollar is determined to make his guitar sound as un-guitarlike as possible. With the exception of the sleazy guitar riff that opens “Best Fuck I Ever Had”, Kollar is riffless and instead experiments with loops, odd picking and, in the beautiful “Like Garbage Left in the Sink”, plays his guitar with a bow to great effect.

The 13 minute “Just A Mermaid” finds Raineri floating above a sub-bass drone with his trumpet, his short phrases punctuating the silence that surrounds them. Cavina responds with light snare fills that somehow manage to sound like rain on a tin roof, whilst Kollar offers subtle volume swells and electronic blips. The effect is a moody, cerebral journey; an exploration of space that “You’ve Been Fucking Dead Women All Your Life” seeks to quickly undo – an explosion of improvised noise that wouldn’t be out of place on a John Zorn album. The Blessed Beat, like KoMaRa before them, defy any label you can through at them; just when you’ve been lulled by their beauty, they kick in your teeth.

Although the music certainly stands on its own merits, Bukowski’s short story could easily be read two or three times over while listening to the album and doing so highlights the twisted, sinister world that The Blessed Beat are attempting to navigate. The trumpet instantly adds a noir quality that perfectly suits Bukowski’s pulp style, and being able to put those track names in context gives another (albeit darker) perspective on the songs themselves.

It will require multiple listens to fully unpack, but even a first impression reveals the high calibre of these musicians. Kollar and Raineri prove themselves to be a formidable duo yet again, and Cavina’s drumming changes the sound dramatically to allow for a much more suggestive listen. This is challenging, uncompromising music that demands attention from its audience. But go in with an open mind, and you’ll find plenty to discover.