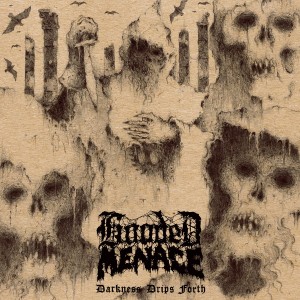 Released on October 30, 2015 via Relapse Records

Finland’s masters of misery Hooded Menace return with Darkness Drips Forth, their second full-length for Relapse Records, which sees them descend further into the depths of death-doom. While their first for the label, 2012’s Effigies Of Evil, contained some of their catchiest and most concise tracks, Darkness sees them cut the tracklist in half, allowing them to fully explore the murky depths of each song.

They have been increasingly indulging their penchant for longer tracks since Effigies, as last year’s split with fellow misery-mongers Loss A View From The Rope and the chilling Labyrinth Of Carrion Breeze will attest to. While this could be attributed in part to Menace mastermind Lasse Pykko recruiting fellow ex-Phlegethon member Teemu Hannonen on second guitar, it also feels like a natural progression for Hooded Menace as an entity.

Ever since a certain band used it on the title track of their eponymous debut and changed the world of music forever, the sound of a distant tolling bell always bodes well for those who like their metal with a touch of horror. So opens ‘Blood For The Burning Oath / Dungeons of The Disembodied’, with the twin guitars of Pykko and Hannonen creating a haunting atmosphere, before the full band come in and build up an increasing feeling of dread throughout.

The guitarmonies are back on ‘Elysium Of Dripping Death’, soon joined by the colossal drums of Pekka Koskelo, whose restrained playing allows the mournful melodies to come to the fore. It’s no secret that this band has riffs for days, but by the time the track gathers enough momentum, they’re just throwing them out there left and right, to the point where it just becomes ridiculous. In a good way, obviously.

‘Ashen With Solemn Decay’ allows Koskelo’s drumming to shine, with a stuttering staccato intro and plenty of solid double-kick work throughout, all underpinning more of Pykko’s wonderfully chewy string-bends and foul bellows. Closer ‘Beyond Deserted Flesh’ is a brute, encompassing the entirety of Hooded Menace’s oeuvre in a single track, with Lasse’s vocals at their most cavernous and rotten.

While many bands of their ilk are content to draw songs out to torturous lengths for the sheer sake of slowness, Hooded Menace’s strength lies in their ability to revel in the same bleakness, but without losing their grip on actual songwriting, use of melody, and memorable riffs; despite the lack of uptempo moments, things are never allowed to stagnate.

By truncating the overall running time and halving the number of tracks, Darkness Drips Forth feels like a relatively trim album for the genre. The move towards the more mournful end of the spectrum is not without precedent in their discography, but may take a little getting used to for listeners only familiar with their previous full-lengths. Listeners who dig their death metal played at torturous tempo, or their doom metal on the morbid side, Darkness Drips Forth is the perfect blend of haunting and heavy.