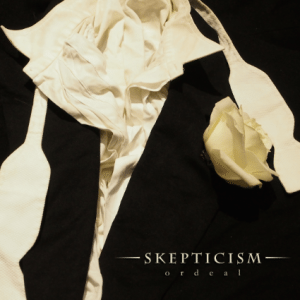 Released on September 18, 2015 via Svart Records

Bands have been trying to capture their live sound on recordings for almost as long as music has been put to track. Twenty four years after forming and twenty years after releasing their first full-length album, Skepticism is still finding ways to push boundaries. With Ordeal, the band decided to record new songs in front of a live audience. What Skepticism has done on their fourth full-length is something not many bands would be willing to undertake.

Recording the album live captures the close feeling of standing in front of the band. It also showcases the fact that Skepticism doesn’t have a bass player. In the studio, Jani Kekarainen is able to layer his guitars and create this crushing sense of ominous doom. On this live recording, the layers obviously aren’t there. It creates a different atmosphere that is no less depressing, but certainly isn’t as thick. The heaviness is filled with a sense of intimacy instead. The sound is more open and this lends itself to the songwriting.

The signature Skepticism sound remains, but the band doesn’t rest on their laurels. ‘You’ starts out with Eero Pöyry’s keyboard and heads into some big riffs, but there are moments of quiet with just Kekarainen’s guitar playing gently before building back into a massive swell of sorrow. ‘The Road’ showcases more of this intimate feeling of, dare we say, life. Pöyry’s keys intone something new, even while reminding us that life is fleeting and mostly meaningless. Matti Tilaeus vocals stand out as usual, both growled and sung. This is still Skepticism, but with a new sense of feeling.

Ordeal is a risk and it’s one that I think paid off. It’s not just another live album of familiar songs, re-recorded over a series of gigs. The band reaches for a new place of connection with the audience. It’s grand and different from anything they’ve done before. It’s still music for your most down and depressed moments. Whether you are already in that place or want to go there, Skepticism not only shows you the way with this album. On Ordeal they take your hand and guide you down the path to darkness.