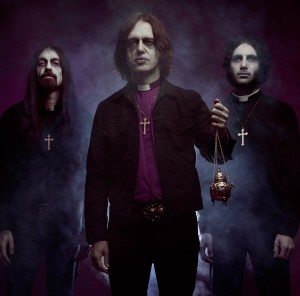 Released on October 16, 2015 via Rise Above Records

Much has been made of the acrimonious nature of Electric Wizard’s firing of drummer Mark Greening, as well as their antagonistic comments regarding former longtime label Rise Above Records, specifically towards label head honcho Lee Dorrian. Unfortunately these events have played out in public for all to see, which has led to reputations tarnished, egos bruised, and a lot of disappointed fans.

The debut recording from With The Dead, the band subsequently formed by Greening alongside long-standing partner-in-crime Tim Bagshaw on guitar and bass, with Dorrian rounding out the trio on vocals, seems to be borne of a need to set the record straight; to exorcise the demons that have plagued the members of late.

As a whole, the album is a far more clear and considered effort than Wizard’s Time To Die, a bloated album that failed to live up to the promise of Greening’s return to the Witchcult, all but burying his cacophonous contribution in the mix. By contrast, With The Dead is a masterclass in heaviness from these three titans of UK doom, seeing them each meld their own instantly recognisable styles into a cohesive vision.

Beginning with the creak of cemetery gates, ‘Crown Of Burning Stars’ bristles with the same malevolence as Greening and Bagshaw’s work in Ramesses, though with a markedly fuller sound than the lo-fi snarl of that band’s output. The richer production and even mix is a welcome step up, and allows for clarity without sacrificing heaviness. Dorrian’s inimitable vocals fit perfectly with the tone of the song, his distinctive cadence lent to a far more aggressive delivery than you might expect from him. Though each member’s previous bands may be obvious reference points (and there are certainly moments throughout the album that will remind you of many of them), this track firmly establishes With The Dead as more than merely the sum of their parts, but as its own evil entity.

Following the opening track with the downright uptempo ‘The Cross’ only serves to confirm this, with Bagshaw’s muscular riffs backed by a propulsive cacophony from Greening that lays bare the influence of the likes of Ginger Baker and Bill Ward on his drumming. Like many of the truly distinctive drummers throughout the ages, his playing does not merely drive the rhythm of the songs, but is an expressive force in itself.

Special mention should also go out to Dorrian’s vocals on this track, which are some of his most vitriolic since his days in Napalm Death. Obviously he’s not gone all the way back to incomprehensible retching and ranting of Scum, but his mid-track howl of “FUCK YOU!” is still a far cry from the likes of “Huggy Bear! Oh yeah!” or the immortal “Put yer Vol 4 on, owww!”. Also, it’s pretty clear who the invective in question was aimed at, making this what might be doom metal’s very first diss track.

You’d swear the twin guitar harmony that opens ‘Nephthys’ was the work of a veteran guitar duo, but both the sorrowful harmony and the subtle bass rumble that rounds it out are the sole work of Bagshaw. It’s an impressive culmination of the style he has developed on each instrument through his playing in Serpentine Path, Ramesses and the Wizard. ‘Living With The Dead’ continues in a similar vein, with some prime lyrical content straight from the Dorrian phrasebook, all “funeral rites” and “cosmic tomb”s, but over a far more suitably horrifying sonic backdrop than the majority of his previous output.

Closing track ‘Screams From My Own Grave’ gives Greening one last opportunity to show off his gargantuan cymbal sound, battering his way through the first few bars unaccompanied before the heaviest riff of the whole album kicks in, alongside Dorrian’s most anguished delivery since his contribution to Teeth Of Lions Rule The Divine’s Rampton. There’s little in the way of variation throughout the majority of the track, just an ever-maddening repetition on the initial theme, but as the end approaches it slowly becomes intensely unsettling, samples of tortured shrieks underpinned by the steady drone of hammond organ and feedback. As with all the best doom metal, ‘Screams…’ is by turns mournful, agonising, and just downright fucking creepy.

While this first offering from With The Dead may not re-invent the (very slow-turning) wheel, it does seem to serve as a much-needed outlet for those involved, giving them a chance to expel anger, frustration and hatred across six tracks of prime doom metal. It remains to be seen whether this becomes a fully-fledged band, or remains a one-time project. Given the obvious songwriting chemistry between the trio, and their bona fide status as the elder statesmen of the UK scene, it would be a damn shame for them to crawl back to their separate crypts, and not continue on living With The Dead.