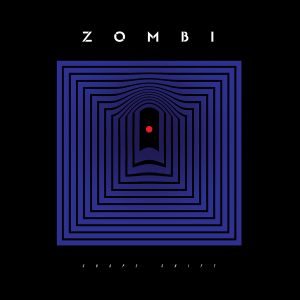 Released on October 16, 2015 via Relapse Records

Over the past few years it has become increasingly common for bands to be proudly influenced by the soundtrack works of the 70s and 80s. More and more bands have been introducing throbbing, fuzzy John Carpenter-esque synths or sparkling Vangelis like textures into their guitar based sound. This influence stretches across genres ranging from post-rock to black metal and back again. While this soundtrack driven rock has been gaining more popularity in the last few years, the Pittsburgh based Zombi has been cranking out quality synth based space rock since 2004. Their newest release Shape Shift is their first since 2011 and seems poised to reach a much larger audience due to an increased appreciation for this type of music and the outstanding quality of their entire body of work.

Zombi is calling Shape Shift a return to their 2-piece live band roots and it shows. Gone are the progish guitar lines of 2009’s Spirit Animal or the longer slow building layers of 2011’s Escape Velocity. Instead this is a leaner, more immediate sounding album. While it seems simpler and less dense than the last two albums, Zombi’s command of mood and their instrumental prowess are on full display as synth, bass and drums all weave together in a technically impressive but listenable way. The songs are generally shorter and often simpler in terms of composition, but Shape Shift is still full of enough twists, turns and dynamic to remain interesting.

The songs on Shape Shift are still built around Zombi’s familiar synths and drums, but like their earliest albums there’s a bit more focus on the bass guitar here. For example ‘Mission Creep’ is built on an extremely simple arpeggiated synth line that rapidly loops over and over again while the bass guitar acts as the lead, supplying all of the melody, forward momentum and movement within the song. It feels more like a live jam rather than a prepared piece of music and the effect is invigorating. Similarly the nimble bass lines of the slow burning ‘Shadow Hand’ provide a melodic counterpoint to the keys at the beginning of the song before falling into a stuttering groove with the drums.

There is a decent amount of variety on the record, which is refreshing because many 2 piece bands tend to get redundant after a few songs. Zombi avoids this by constantly shifting the focal point of the songs. ‘Total Breakthrough’ begins with a synth and drum segment that wouldn’t feel out of place on an 80s Rush record and builds to one of the biggest climaxes on the record with synths, bass and drums all hammering on several melodic themes established throughout the song. The doomy shuffle of ‘Interstellar Package’ is another standout. As one of the only 2 songs to cross the 8 minute mark it is the most complex (arrangement wise) song on the album and is reminiscent of their last two albums, though presented in a much sparser way. If it was played on guitar rather than synths it wouldn’t be too terribly dissimilar to a stoner/doom metal anthem. Compared to ‘Interstellar Package’ the upbeat grooves of ‘Toroidal Vortices’ could almost be a pop song, albeit a strange one. Album closer ‘Siberia II’ is the longest, most repetitive and most soundtrack like song on the album. It slowly churns and crawls along over the course of 14 minutes and is probably the most appropriately named song on the album in terms of the mood it creates.

Zombi has been at this for quite a long time and Shape Shift shows both confidence and comfort in what they do as a unit. While it may not break a lot of new ground for the band, I don’t think that was the point of this record. Trying to get back to the roots of a sound you’ve been working on for over 10 years is a challenging prospect and for the most part Zombi pulls it off without sounding like they are repeating themselves too much. Shape Shift may not be their boldest or even their best album, but it is a solid statement of intent as they gear up to begin touring again. Long time fans will find much to love on here and it also serves as an excellent primer for the many new fans they deserve to get.