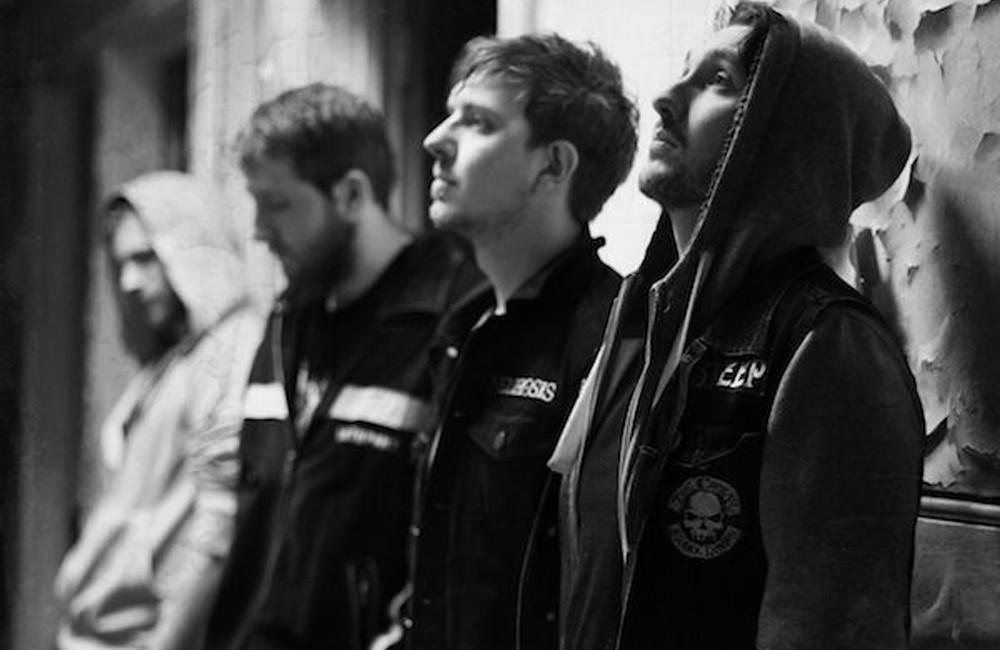 Colchester based post-metal outfit Telepathy have been steadily making a name for themselves since the release of their impressive debut album 12 Areas last year. With a new album and live shows in the pipeline Andrew Rawlinson decided to fire some questions in their direction to find out what’s up. Guitarist Richard Powley answered the questions.

(((o))): Thank you for your time and doing this interview. First of all can you please introduce yourselves by telling us when you first formed and how the band all know each other?

Richard: No problem, thanks for getting in touch! Telepathy formed back in 2011 when three of us were studying music technology together. After the departure of our initial bass player, we now have Teddy-James Driscoll as our permanent bassist.

(((o))): Your style is a very impressive take on the post-metal genre. What is it about this style of metal that appeals to you? And has your intention always been to be an instrumental band?

Richard: Thanks for the kind words. I suppose the combination of atmospheric and heavy, lengthy song structures appeals to the way we write music as a band. That said, we never set out to fit into a particular genre and have always drawn influence from a wide variety of styles – be it prog, noise, doom or black metal – to create our sound, and perhaps this is where people are hearing a new take on post-metal in our music. When we began our only aim was write music we all enjoyed, it just turned out there was no room for vocals in our compositions. When the opportunity arises and vocals will add something to the songs as a whole, we are open to the inclusion of them.

(((o))): Your debut album 12 Areas has generally been well received since its release. Has this surprised you and is there anything you wish you could have done differently?

Richard: We never expected anything when we put out 12 Areas; we only knew it was a record we were really proud of. The reception was surprising and to read and hear the positive response it received across the world was a complete treat for us. Of course with every record there are things you wish you could go back and change after time, whether it’s to do with the songs themselves or things in the studio you wish you done differently. In our opinion without these things and an urge to express yourself in a clearer way, we wouldn’t continue to write and record music.

(((o))): You are currently in the process of writing your second album. How is that coming along and how does it differ from 12 Areas?

Richard: At the moment I would say we are around 80% done with the writing aspect of the album. It’s been growing and evolving brilliantly since Ted joined us at the beginning of the writing sessions. So far it’s sounding like a huge step forward to us. While it still sounds intrinsically like Telepathy, there are areas of our sound that have been pushed to the forefront. There’s more of a bleak and chaotic black metal influence and we have allowed some of the slower, heavier parts to breathe and become more powerful. We’ve ventured into more progressive territory too. The theme behind this record is different and so the music has had to accommodate it.

(((o))): Apart from the obvious bands, who and what else have influenced you?

Richard: This is a tough one as we are all fans of lots of different music in Telepathy. If it’s a good song then that’s all that matters. We’re all big hardcore and crust fans here, something that might become more apparent when watching us live. We are also into all kinds of electonica, ambience and noise (some of us have side projects in this direction) and also black metal, doom, sludge, psych, krautrock. All of this has been and continues to be an influence. On a side note we can regularly be heard smashing out Cyndi Lauper’s greatest hits in the van.

(((o))): You also appear to be gaining a lot of support from a spectacular live performance, what should the uninitiated expect from a Telepathy show?

Richard: Thanks! We pride ourselves on being a primarily live band and put as much of ourselves into each show as possible, so our live show can be quite captivating and intense. We favour volume and with our music being instrumental there is no lyrical narrative to communicate. This means that, if you let it, the music will guide you through whatever narrative you give it and therefore each live show has the potential to become a powerful emotional journey that is personal to every individual in the audience. I suppose people can expect to see the four of us giving an honest and cathartic expression of what the music means to us.

Richard: We try not to look back too much as we’re pretty focused on what’s ahead, but releasing 12 Areas to such a great reception, playing Incubate Festival in Tilburg and touring the continent three times has been the stuff dreams are made of.

(((o))): Are there any places (venues, countries etc) in the world that you really want to play?

Richard: Obviously we’d love to make it over to America at some point, and we’d also love to get to Scandinavia and more of Eastern Europe as we haven’t managed to get there yet. There’s still a lot of work to do in the UK and mainland Europe though, so we’ll see what happens in the not-so-distant  future.

(((o))): You’re given the opportunity to create your own festival, who would be the first five bands on your list?

Richard: Off the top of my head:

I’m giving myself a bonus question here and selecting Fever Ray and Burial for the after party.

(((o))): Thanks a lot for answering my questions. Is there anything you would like to add?

Richard: Thank you for taking the time to speak to us! We’ll be heading into the studio early next year to record the follow up to 12 Areas and we’ve plenty of other exciting things to announce in the coming months. We are hitting the road later this month (November) for a weekend mini-tour with our friends Conjurer. Come and say hello. The dates are as follows: