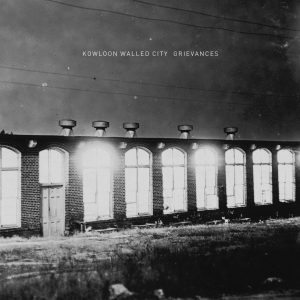 Released on October 9, 2015 via Neurot Recordings

It’s been nearly 3 years since Kowloon Walled City dropped Container Ships on us all. It was an end of year best for many a listener, writer, reviewer, and general cool kid. The progression it showed from the band’s début Gambling on the Richter Scale was impressive. The sound was similar, just with more structure, and an obvious sign that more thought was given during the song writing process. Grievances is the new album from the band, their first for heavy music powerhouse Neurot Recordings, and the same signs of maturity and progression are present again, just a level up from where they were previously, and let me be absolutely clear from the start, this is the band’s finest work to date.

The band’s sound from the outset has been clear for me, Melvins (in a blender) meets the charge and ferocity of Unsane, but as they have progressed and become stronger song writers, they have introduced more dynamics, upped the emotion and continually dropped the ‘in your face’ meter, and with this being the band’s most emotionally driven release to date, it’s certainly a new beast.

The sound is still as strikingly heavy as always, just for completely different reasons. Gone are the dominating heavily distorted guitars, gone is the screaming and gone is the pummelling staccato riffing with fast, brain hammering drums instead we have a lot of drawn out sections with lots of space for sonic weight and resonance. Crystal clear guitars that chime and dominate the sonic landscape, yet still deliver a hefty gut punch. More so than ever in fact when they band step it up from quiet to loud. The bass still carries the same pummelling trademark grunt, which is reassuring. It’s the one thing that should never change. The vocals are reminiscent of the style that dominated on Container Ships, just less of the shouting and more of the ‘slivering drawl’. It really is a pleasure to listen to from start to finish.

Recorded by band guitarist and vocalist Scott Evans at his studio Sharkbite A, it’s obviously painstakingly and meticulously thought out, but the album is completely organic sounding. It’s immersive, heavy, clean, brutal, beautiful and quite literally tone city for every single instrument. It’s like you are in the same room as the band.

With regards to standout tracks on the album, be sure to check out ‘Your Best Years’, ‘The Grift’, and ‘White Walls’ for some ones, but every single track is massively rewarding in the context of the album from start to finish.

As true as the words from ‘Your Best Years’ may be (even out of context), I think the band’s best years may yet be ahead of them…