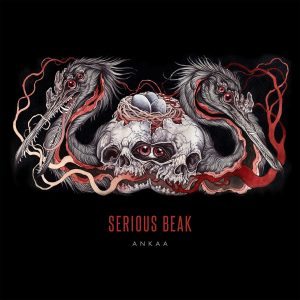 Released on November 3, 2015 via Art As Catharsis Records

If you think, as I did, that Serious Beak have some Serious Cheek in taking the names of Meshuggah, Mastodon and King Crimson (in an otherwise laudably understated piece of PR) then think again. Because after 24 plays, and counting, I’m here to tell you that not only can they roost in that pecking order, but that with Ankaa, they have produced one of the standout instrumental prog albums of the year – an aptly dazzling star in the progressive rock constellation.

It’s been four years since we last heard from these four downunder djentists, and their promising if impossibly named début, Huxwhukw, tagged conveniently as prog metal, but with a unique mix of styles that defies any description except their own, ‘avant beak’. A fan on Bandcamp observes that it’s like having a quiet latte in your local coffee shop interrupted by a juggernaut driving through the window. So after such a long hiatus, how good could Ankaa be? So good, that you’ll need a long black to go and be ready to imbibe it from 100 metres away.

Don’t be deceived by the outward simplicity of the album – with only four tracks running for a mere 35 minutes it’s easy to think that this is little more than an EP sampler, but nothing could be further from the truth. Ankaa, it turns out, is a complete symphony set in four, meticulously composed movements, each one with a simple title tagged with an ornithological taxonomic. More Serious Geek than Beak, you might say, but a few wiki clicks will have you on the flight path to enlightenment in no time.

We open with ‘Proto’, and the muted scream of Tim Brown’s and Lachlan R. Dale’s tremolo-strummed guitars riding in on a wave of white noise, underpinned by the rapid marching time of Gene White’s earthy drums and Andrew Mortensen’s gravelly bass, before jumping into a delightful sequence of math-riffs, crunching doom-chords and grinding guitars. But this is no arbitrary mash-up or calling-card; this is a proper overture that references many of the themes and motifs to follow. Listen out in in particular for the inverted ‘clock chimes’, and the chainsaw guitar chorus there to complement the Menura novaehollandiae (Superb Lyrebird) of the track’s subtitle: a large, forest songbird whose 20+ moments of mimicry include a buzz saw. It’s a dazzling two-minute prog storm that’s all the more powerful for its jump cut to a gentle, post-rock inspired coda with its ringing, sustained chords and reflective, unresolved arpeggio outro that raises our curiosity…

‘Main Sequence’ that follows, raises it even more with a glorious tongue-in-beak opening of angular chords and a crazy Swanee whistles that befits the Laughing Kookaburra (Dacleo noavaeguineae) of the subtitle. But with 13 minutes to come, this proves to be a mere ‘knock-knock’ intro to the rich musical layers that follow, at the core of which is a luscious, post-rock landscape of brushed drums and cymbals and lilting arpeggios that tilt from major to minor. It’s clear this track is going to be a slow-burner, like the outback sunrise it seems to portray, an unfurling of themes that come and go, until by six minutes the first shafts of prog and math sunlight start to tease us awake before a grinding, doomy interlude that bridges to an adorably old-school heavy-rock gallop around the eight minute mark. The gloom returns briefly before the rock theme canters away again, building back to the sustained main arpeggio sequence, capped with a lead guitar breakout, that gallops on to an outrageously OTT rock-school coda – a minute’s worth of noise and chatter before the Kookaburras return and piss themselves laughing at the pomp rockiness of it all! It’s a brilliant, playful close to a piece that reveals more of itself with every listen.

The simply titled ‘Red’ proves to be not only the standout track of the album but also the most standalone. It is, quite simply, 10 minutes of the best prog metal you could ever wish for, with more time signatures than a petition against junior doctors’ hours; and I guarantee that if you’ve got any coffee left at this point you’re going to spill it. If you only have time to take a peek at the Beak, then start with this track…

Disciples of Cleft will no doubt appreciate the turbo math-riffs that tumble over each other, only to my mind they’re even better, avoiding Cleft’s tendency (and I say this as a fan) to get stuck in formulaic cul-de-sacs and replacing some of the theory with a huge dose of soul. Themes here develop, return and recapitulate, with the inverted ‘clock chimes’ prominent among the many that come to the fore in a sequence with the lightest of post-rock touches. The unexpected metamorphosis that follows brings on grinding metal, with chugging chainsaw guitars and Melvins’ style tribal tom-toms, capped with throwback Strad-Strat shredding. At this point, I should explain that the Cinerous Mourner (Laniocera hypopyrra) of the subtitle is a bird whose fledglings throw their predators a dummy by impersonating poisonous caterpillars! It’s no surprise then that a glorious glam-rock coda proves nothing of the sort, and we return to angle-grinder guitars and pile-driving toms.

’Red’ showcases playing of the highest order and flamboyance, but without a note of narcissism. Nothing here is done for show, you feel; everything has a place and a purpose, not least the final coda where the ‘clock chimes’ re-echo in an eerie precursor to the final movement.

We end with ‘Heat Death’ – the most straightforwardly named track on the album. We are back in the arpeggio-ridden, arid post rock soundscape of ‘Main Sequence’ only with a dense backdrop of doom and menace that suggests not a sunrise, but a final sunset. The Teratornithidae of the subtitle is an extinct pre-historic vulture, and as the tremolo-strummed guitars scream a climax it is clear we are in the throes of its death rattle, the raptor equivalent of a swan song, if you like, with its final moments measured out in the gently plucked harmonics of a failing heartbeat. It’s a piece that doesn’t so much end as expire… fading away into silence and a wilderness of white noise.

Ankaa is nothing less than a stunning record: a poly-rhythmic paradise that, to paraphrase William Morris, “contains nothing that you do not know to be progressive, or believe to be beautiful”. It’s a masterpiece: a symphonic concept album that demands its movements be played in sequence, and in one sitting, and which rewards you handsomely for doing so.

But perhaps the greatest achievement of Ankaa is that it succeeds in mixing genres so effortlessly that its appeal reaches far outside the prog niche: Fans of metal, math, post-rock and psych will all want to adopt this album as their own, I feel. Hybrid bands frequently fall into the trap of trying to please everyone and satisfying no one, but not so with Serious Beak: Ankaa is a mountain that can be ascended by many paths.

So all hail the Beaky Boys! In bird terms I see them as the punky jackdaws flying in to shake those stuffy prog rooks and ravens out of their too comfortable trees. Like the Phoenix they allude to in the album title, this bird’s on fire! Catch it by the tail while you can, and hang onto your coffee – it might be another four years before the next flight…